The History of Carl Martin Oehman 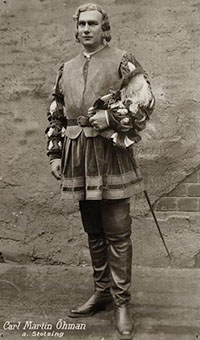 Oehman studied the piano and the organ at the Stockholm Conservatory, and then, privately, singing in Stockholm and Milan.
He appeared first in concerts in 1914, making his operatic début in Fra Diavolo at Göteborg three years later. The Swedish Royal Opera, which became the centre of his career, heard him first in 1919 and last in 1941.

He became well known for his singing of the more lyrical Wagnerian roles, yet in his single season at the Metropolitan in 1924 he appeared only as Laca in the American première of Jenůfa and as Saint-Saëns’s Samson. At Covent Garden in 1928 he sang Tannhäuser and Walther in Die Meistersinger: the power of his full voice and the charm of his mezza voce were admired.