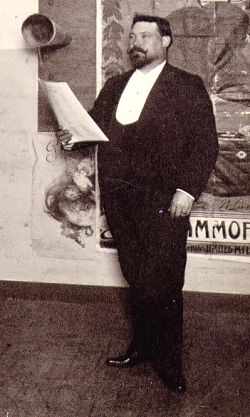 Narrative 1
Rather like the great singers of imperial Russia, the French chose in general, to stay at home rather than pursue international reputations. With all the attendant vigours of long sea and coach travel. Travelling from Paris to North and South America and Eastern Europe was no fun in those days. This it was, that many of the greatest French and Russian singers were practically unknown outside their own country. And indeed, were it not for the enthusiasm, diligence, and interest, of the student of the vocal art, most of them would be totally unknown today.
One such was, Agustarello Affre. For 20 years the leading dramatic Tenor at the Paris opera, along with Escalais. Affre made his debut at the Paris Opera in 1890 in Lucia de Lammermuire with Melba, one of her first appearances there. And we know that they were both in a terrible state of nerves. During his 20 years at the opera, he sang many of the great roles made famous by his predecessors Nurite and Dupre proceed as William Tell, Miarbieres Les Uganos and la fricane and alais de la juis, as well as the more modern Operas of Armani, Aida, Rigoletto, Romeo, Kraust, ljunggren etc.
Unfortunately for us, Affre recorded mostly for the leading French company of the day, Pathe. And they had chosen an entirely different system of recording, from that of the other leading international companies, such as G&T (later HMV), Colombia, Aunotapaia, Odeon etc. This method has gone down in history as ‘the hill and dale method’ and some, would you believe, even started from the centre out, rather than from the outside in. The famous or infamous centre starts.
And so, it goes without saying, that all such records are now great rarities. So, in addition to the primitive recording technique, there is a difficulty of being able to transfer the sound onto modern equipment and despite the wonderful advances of today, Hill & Dale Records still do not transfer it well. So, as with many of these ancient recordings, you will have to make generous allowances and try and shut your ears to the surface noise and accompliment. Believe it or not you can actually get used to it. Here then is Affre in Masne’s Opera Le Mage and the lovely little Aria – Ah Parais.

Narrative 2
That record was a Pathe of 1910, when the singer was 52. And at the same session he gave us a glimpse of a famous Nurite Duprero, Rauo in Les Huguenots