The History of Jess Thomas 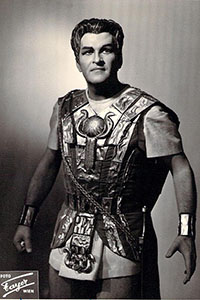 Thomas made his operatic debut in 1957 for the San Francisco Opera performing in Richard Strauss’s Der Rosenkavalier as the Haushofmeister. In 1958, he debuted in the title role of Richard Wagner’s Lohengrin for the Karlsruhe Staatstheater at the commencement of a career in Germany. Following that Thomas quickly appeared in all the opera centres and became known as an “opener” due to his engagement at the inaugural performances of the rebuilt Deutsch Oper in Berlin, Stuttgart and in 1963 at the re-opening of the National Theatre in Munich. Thomas was invited to sing the role of the Emperor in the opening performance of Die Frau ohne Schatten on 21 November and Walther in Die Meistersinger on the 23rd both conducted by Josef Keilberth. Of course on the 22nd the assassination of President Kennedy rocked the world and it was decided to carry on with Die Meistersinger the following day. As told by Jess Thomas in a lengthy interview of 1993 a few months before his untimely death from a heart attack (see Ealdred Aruspex’s YouTube channel) the two American singers, Claire Watson and the tenor, were moved to tears by the singing of the Star Spangled Banner and tribute preceding the performance.

A reviewer for Opera News wrote how the young tenor “filled the large opera house” with his clear strong voice. (Opera News November 1963)

Later in his career Thomas would be invited to sing five Wagnerian roles over the Vienna Festival managing three.

It was at Bayreuth that he established his reputation as a Wagnerian tenor performing in the following roles:

He recounts having no prior experience or knowledge of the role of Parsifal when joining the cast under Hans Knappertsbusch. The live recording of this performance has since become a reference in the opera’s discography along with his later recording of Lohengrin with Rudolf Kempe. (Interview in 1993 and Gramophone Magazine)

On December 9, 1981, San Francisco Opera general director Kurt Herbert Adler called Thomas an hour before a performance of Die Walküre. Heldentenor James King had lost his voice, and Adler asked Thomas if he would like to sing the role in an hour. “But I haven’t even shaved yet,” Thomas said. Though he hadn’t looked at the score in years, Thomas performed the role at age of 54, relying on a strong memory of the Siegmund role and some expert prompting. The next day, headlines proclaimed Thomas’s 11th-hour rescue for Die Walküre.[5][6] Thomas’s farewell performance took place in the title role of Parsifal with the Metropolitan Opera in 1982 while it was on tour in Washington DC.