The History of Mario Lanza 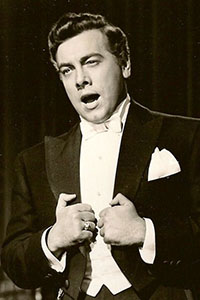 Described by Arturo Toscanini as “the greatest voice of the 20th century”, Mario Lanza was born Alfredo Arnoldo Cocozza on 31 January 1921 in Philadelphia.

His parents were Italian ’emigres. His mother, Maria (nee Lanza) had a beautiful soprano voice and dreamed of a singing career, but her father decided that the stage was no place for a married woman. His father, Antonio Cocozza was a First World War hero and had a fine collection of grand opera records. At the age of five, little “Freddy” showed a great interest in the old family Victrola which regularly played recording of Caruso and before long, the young boy was singing along with Caruso’ s records.

At the age of sixteen, to his parents’ great delight, he announced his intention to become a singer. His mother saw the realisation of her own dreams through her son’s ambition and made every sacrifice to enable him to attend the singing lessons he needed. He was discovered by the conductor Serge Koussevitsky, who was so impressed with his singing that he granted him a scholarship to his Berkshire Music School. He made his debut at the Berkshire Music Festival in 1942 as Fenton in ” The Merry Wives of Windsor”, changing his name to Mario Lanza as a tribute to his mother. But, just as his career was starting to take off, it was abruptly interrupted by conscription into the US army.

He appeared in the Army shows ” On The Beam” and “Winged Victory” and demobilised in 1945. In April of the same year he married his friend’s sister, Betty Hicks. The marriage was blessed with four children – Colleen, Ellisa, Damon and Marc. One of the Lanza’s voice coaches, the well-know Enrico Rosati, formerly coach to Gigli, recognised his genius and unique talent and in 1946 intensive preparations were made for Lanza to sing Verdi’s ” Requiem” for Arturo Toscanini, but Mario felt he was too young and not yet ready for the role.

Enrico Rosati said that Mario Lanza had one of the most beautiful voices he had ever heard . He also said that he had an exuberant character, but also that he was very generous and amiable with a great heart, which was evident in the way that he sang. Between October 1945 and February 1946, Lanza appeared in six programmes of “Great Moments In Music” in New York, singing arias such as the love duet from Verdi’s “Otello”. In July 1947, he formed the Bel Canto Trio with Frances Yeend, soprano and George London, baritone. In eleven months, the trio gave 84 concerts across the United States, Canada and Mexico. In the meantime, Lanza had made his debut at the New Orleans Opera House as Pinkerton in Puccini’s “Madame Butterfly”. His 200th concert appearance was in the open air at the Hollywood Bowl on the 28 August 1947, a day that was to change his whole future career. MGM chief Louis B Mayer heard him and a seven year contract was soon signed.

Among Mario Lanza’s many films were “That Midnight Kiss” (MGM 1949) and “The Toast of New Orleans” (MGM 1950), which included the song “Be My Love” , his first gold record. His greatest film success, The Great Caruso” (MGM 1951) made him world famous. He made a legendary US ” Caruso Concert Tour” in 1951 and ” Lanza Fever” swept the whole of America. “Because You’re Mine” (MGM 1952) was selected for the Royal Command Film Performance in Britain. Between June 1951 and July 1952, his radio programme “The Coca Cola Show” proved extremely popular. Songs from these shows are still being released. For the film The Student Prince}{ (MGM 1954), he made the recording two years before the film was released. “Serenade” (Warner Brothers 1955), his last film made in America, provided a vehicle for his great dramatic talent.

In May 1957, Mario Lanza moved with his family to Rome where he made two further films ” The Seven Hills of Rome” (MGM /Titanus 1957) and “For The First Time” (MGM/CCC1958). Whereas in 1949, he had felt that his voice was too immature to open the season at “La Scala” or to join the Metropolitan Opera in New York, he now felt that his voice had matured and was ready for the opera stage. First, it is said that arrangements were made to complete studio performances of the great operas with Maria Callas. Lanza then made extended concert tours in Europe, starting in November in England with the Royal Command Performance, followed by nation-wide tours including the Royal Albert Hall, Birmingham and Sheffield Concerts. He sang in Belgium, Holland, France and Germany.

His very last concert was on 13 April in Kiel, Germany, where his voice was “darker and richer, and he sang as never before” as his pianist Callinicos recalled. In the “Triumph March” for the final scene of “For The First Time” he oversang the 260 member Rome Opera House orchestra and chorus. The General Director Ricardo Vitale was deeply impressed and in August 1958 Mario accepted his invitation to open the Rome Opera season in 1960 with “Tosca” . Mario Lanza was full of plans and activities. His itinerary for 1960 was already filling up with plans to sing in South Africa, Hungary and Russia. In June 1959 he signed another film contact – “Laugh Clown Laugh” and made several recordings, the very last on 10 September 1959 “The Lord’s Prayer” which was never released.

Mario Lanza’s last year was plagued by ill-health and a demanding workload. Overworked and exhausted, he was admitted to the Valle Giulia Clinic in Rome on 25 September 1959. He had been troubled by pains in his left side, his blood pressure was high and he was suffering from phlebitis. Dr de la Toore, a heart specialist was called in, but by then Lanza had decided to sign himself out and go back to work.

On the morning of 7 October, Lanza rang his wife telling her to expect him home, but just after midday he suffered a sudden massive heart attack and died.