The History of Antonio Paoli 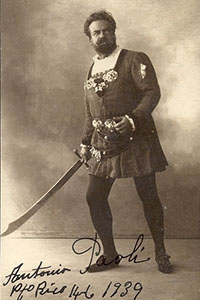 Paoli was known as “the king of tenors” in his day and the first Puerto Rican to reach international fame in the arts.

He showed an early interest in singing that was triggered by a concert performance by the Italian tenor, Pietro Bacceri in Ponce’s Teatro La Perla. Paoli’s parents were instrumental in supporting and guiding him during his youth but both of his parents died when he was only 12 years old. Paoli then went to live with his sister Amalia, who had moved to Spain.

Herself a singer, Paoli’s sister Amalia helped arrange a scholarship from Spain’s Queen María Cristina, for the young Paoli. In 1882, he started his studies under that scholarship, at the Real Monasterio del Escorial.

Later, Amalia again helped Paoli’s career by securing a second scholarship to study voice in Italy. He then went to study at the Academia de Canto La Scala in Milan, Italy in 1897, and subsequently debuted in Rossini’s opera “William Tell”, in Paris, only two years later.

Paoli’s great talent quickly brought him recognition and aclaim across Europe. By 1900, his performances had paved the way for a concert appearance at the pretigeous Covent Garden in London. Shortly afterwards, Paoli returned to Puerto Rico on the heels of allegations that he denied his Puerto Rican origins, which he denied.

Antonio PaoliIn 1901, Paoli embarked on an international concert tour where, once again, he garnered the broad acclaim of the opera critics. Among his appearances were performances in the operas “Lohengrim” by Ricardo Wagner and Verdi’s “Il Trovatore”; singing Di Quella Pira, for example, in cities such as Buenos Aires, St. Petersburg and Warsaw. He also appeared in countrues such as Egypt, Palestine, Hungary, Belgium, Cuba, Chile, Haiti, Colombia, Venezuela, Brazil, Canada, and the United States. In Moscow he was awarded a medaal by the Czar.

Paoli was the first opera artist in the world to record an entire opera: Leoncavallo’s “Clown”, in 1907. It was the beginning of a highly successful career as a recording artist, giving him and his native Puerto Rico, world-wide recognition.

Only three years later, Paoli was appointed “first tenor” by one of the best known opera companies in the world: La Scala, in Milan, Italy. In 1912, he again sang in the opera “Lohengrin” in Vienna and received a standing ovation from none other than the Austro-Hunagarian Emperor, Franz Joseph.

With the advent of the Great War, Paoli left Europe for Puerto Rico. By this time, despite Paoli’s success, he was blocked from appearing at the most famous opera hall in the Americas: Carnegie Hall, in New York City. Some attribute this to the fact that his artistic arch-rival Enrico Caruso was a shareholder of the reknown opera house.

While many maintain that Paoli and Caruso were friends, the rivalry was clearly evident in Paris when Paoli was picked over Caruso for appointment to the Paris Opera, due in part to Paoli’s high physical stature and stage presence. Paoli quickly learned to speak French and was highly successful in Paris.

Although his success on stage and through recordings brought him substantial income, Paoli’s largess during World War I and poor investments, ruined him financially. In a story that underscores the saying that “truth is stanger than fiction”, Paoli was compelled to extraordinary measures to raise enough capital for a return trip to Europe: the stately opera singer became a prize fighter.

In 1922 he started teaching voice in his native Puerto Rico, establishing a school together with his sister Amalia. His lot improved and he even helped produce the “Othello” at the Municipal Theater in San Juan shortly thereafter.

Following the success of his music school in Puerto Rico, he pursued the establishment of music conservatory. Despite his tireless efforts in that campaign, he never saw the realization of that dream during his lifetime. Despite this, and in recognition of his fame and talent, the government of Puerto Rico awarded him a pension in 1934, and a year leter, named the Municipal Theater in his honor.

Paoli died childless, of cancer on 24 August 1946. The music conservatory that he lobbied so hard for, was founded in the next decade; a testament to the artist’s ample accomplishments.