The History of Jozsef Reti 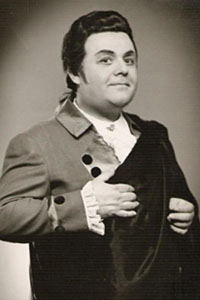 Hungarian tenor, József Réti, started his singing career as a chorister at the F. Liszt Choir in Budapest, then after he graduated from The F. Liszt Academy of Music in Budapest. In 1956 he won The Schumann Prize in Berlin, while in 1957 the Gold Medal in a competition in Moscow.

József Réti was a leading tenor in the National Opera House in Budapest during the 1950’s -1960’s. His deep and resonant voice enabled him to perform liturgical music such as Matthäus-Passion (BWV 244) and other oratorios, as well as numerous operas of Rossini, Verdi and Mozart in Eastern Europe and Latin America. In 1961, he was awarded the Ferenc Liszt National Prize, while in 1968 he was appointed as the Most Outstanding Artist of Hungary.

From 1953 to 1973 József Réti was engaged as a staff member of the National Opera House in Budapest. In 1964 he was appointed as a Professor of Vocal Music at the F. Liszt Academy of Music in Budapest.