The History of Ivan Yershov 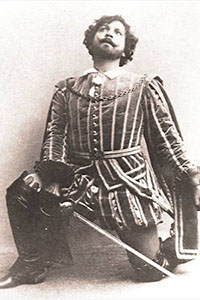 Narrative 1
Vignas was born in 1863. Four years later in 1867, not one, but three outstanding tenors were born. One was Russian, one French and one Dutch. One of the very few and certainly the greatest of Russian dramatic tenors was Ivan Yershov, born in Russia in 1867. In dramatic roles, he ruled at the Mariinsky Theatre in Saint Petersburg from 1895 to 1916 and continued his association with that house after his singing days were over until 1929.
After initial study in Moscow, Yershov decided to study further in Italy in 1893, and a professor rose, and before returning to Russia, made some appearances in Turin. During his long reign at the Mariinsky, Yershov sang most of the standard heroic roles, including Rao, Vasco da Gama, John of laden, Don Jose etc and in addition tackled Otello and all of ignarian heroes. A typical glittering occasion would be the Goaten damaron of 1903. With Yershov, Litvine, Toshina, Slavena, and Kitowski.
He left us with very few records, all withdrawn by 1910 and all great rarities. Fortunately, we hear him here in 1903, at his peak and in one of his greatest roles Mierbiere’s the Prophet. Firstly the Sopra Berta which will enable us to compare him immediately with Vignas.

Narrative 2
John Stein mentions Yershov as being one of the most impressive of all early Russian tenors. His was a sturdy ringing heroic voice as we can hear in an excerpt from Tannhauser. But more than that, he could wield his powerful instrument with grace and elegance. We hear the variety of his singing, the brilliance and imagination of it, in some marvellous singing of solos of Mierbieres L-Prophete, well we have heard one of these arias. Now let us hear the second from L-prophete, the famous Corriam.