The History of Chris Merritt 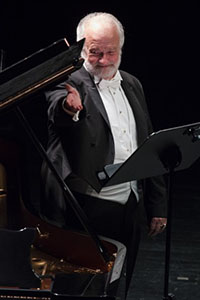 Chris Merritt, having achieved iconic status among tenors of the bel canto ilk, certainly doesn’t limit himself to that genre alone. A quick glance at a list of his repertoire, much of it recorded, reveals not only bel canto roles, but also a healthy mixture of works in the Baroque, classical, verismo, and modern styles. His professional debut was at the Santa Fe Opera in 1975 singing Dr. Caius in Verdi’s Falstaff, but that was followed quickly by high-profile performances of works by Bach, Handel, Telemann, Gluck, Haydn, Mozart, Beethoven, Bruckner, Richard Strauss, and Carl Orff in very important European venues, many of them recorded.

But it has been his portrayals of the dramatic bel canto tenor roles, which has set him apart from the rest of the pack. Beverly Sills engaged Merritt to make his New York City Opera debut singing Arturo in Bellini’s I Puritani in 1981. The same year, Vienna heard him for the first time in Halevy’s La Juive, opposite Jose Carreras and Cesare Siepi. He made his Carnegie Hall debut in 1983 in Rossini’s Tancredi with Marilyn Horne, and later the same year made his Paris debut at Palais Garnier in Rossini’s Moïse et Pharaon, under the baton of Georges Prêtre. Also in 1983, Merritt made his UK debut singing Beethoven’s Ninth Symphony at the Royal Festival Hall under Klaus Tennstedt. Chris Merritt’s Royal Opera House, Covent Garden debut was in Rossini’s La donna del lago, followed by Semiramide in Hamburg, and his Italian debut in Maometto II in Pesaro…all in 1985. Shortly after, he performed in Rossini’s Il viaggio a Reims in a production at Milan’s La Scala directed by Luca Ronconi and conducted by Claudio Abbado. Merritt made his debut at the Lyric Opera of Chicago as Percy in Donizetti’s Anna Bolena, singing with Joan Sutherland in a production directed by Lotfi Mansouri with Richard Bonynge conducting.

His Metropolitan Opera debut took place on November 30, 1990, when he sang again with Marilyn Horne and Samuel Ramey in Rossini’s Semiramide. That same season there, he sang I Puritani along with Edita Gruberova and Paul Plishka, conducted by Richard Bonynge. Other principal roles at the Met included those in Rusalka, with Renee Fleming and Dolora Zajick in 1997, and in Kát’a Kabanová in 2005.

Elsewhere, he sang again at Covent Garden in Semiramide, in Guillaume Tell (in 1990 and in 1992), in Henze’s Boulevard Solitude and in Kát’a Kabanová. At the San Francisco Opera he sang in Maometto II (debut in 1988), and also in Guillaume Tell in 1992 and 1997/98 seasons, in Rossini’s Otello, in I Vespri Siciliani, and in Saint François d’Assise and Doktor Faust. Both in 1988 and in 1989 he appeared in the opening productions of La Scala’s opera season, with Guillaume Tell and I Vespri Siciliani. Both were conducted by Riccardo Muti. He then returned in La donna del lago. At the Opéra de Paris, he returned to sing the title role of Benvenuto Cellini, appeared in two different seasons as Herod in Salome, as Le Lepreux in Olivier Messiaen’s Saint François d’Assise, and as Eleazar in La Juive.

In 2006, Merritt appeared in the American premiere production of Thomas Adès’ The Tempest, marking his return to The Santa Fe Opera.