The History of Peter Schreier 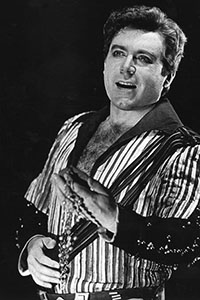 Peter Schreier was not only an incomparable Evangelist in Bach’s Passions and one of the most fastidious and expressive lieder singers of his generation, but also, in the world of opera, a leading Mozartian who made productive forays into less predictable repertoire.

With a cantor (church choirmaster) and organist as his father, and having been reared as a chorister in the Dresden Kreuzchor, he could be said to have the music of Bach flowing in his veins. He was certainly to put his lithe, agile instrument to good use as an eloquent soloist in the passions and cantatas.
Sign up for the Sleeve Notes email: music news, bold reviews and unexpected extras
Read more

His approach was by no means over-reverential, however: in the St John Passion he could bring the Evangelist’s account of Peter’s guilty anger and indignation, followed by his bitter weeping, to strikingly dramatic life at the disciple’s denial of Christ. He also made the whipping of Jesus sound suitably savage, while the description of the crowd’s shouting out for Barabbas rather than Christ could be delivered with a theatrical shriek.

In the field of lieder, his gleaming if slightly reedy tone equipped him for sublimely sentient readings of Schubert and Schumann. He recorded several of the major song cycles more than once, striking gold with his recordings of Schubert’s Die Schöne Müllerin and Schwanengesang with the pianist András Schiff, whose equally penetrating accompaniments brought out the best in him, also creating memorable interpretations of Winterreise with both Sviatoslav Richter and Schiff.

His consummate artistry and expressivity, sometimes compared with that of his colleague, the baritone Dietrich Fischer-Dieskau, in terms of their subjective, “interventionist” approach to lieder, were also evident in two cycles by Schumann, Dichterliebe and the Eichendorff Liederkreis, as well as Hugo Wolf’s Italienisches Liederbuch.
Peter Schreier singing Schubert’s Serenade with Rudolf Buchbinder, piano

After the death of Fritz Wunderlich in 1966, Schreier was acclaimed by some as the leading Mozart tenor of the day and indeed his Belmonte (Die Entführung aus dem Serail), Idamante (Idomeneo), Ferrando (Così Fan Tutte) and Titus (La Clemenza di Tito), all recorded under Karl Böhm – together with his Tamino (Magic Flute) under Colin Davis – are all readings notable for their strong characterisation and high musical intelligence. Not everyone agreed: some critics complained of the “dryness”, even “sourness” of his voice, though such acerbity was only ever evident when he sang forcefully at higher dynamic levels, and none questioned the technical control or dramatic conviction.

In roles such as Tamino, Schreier’s perceived lack of tonal glamour and sweetness made for invidious comparisons with Wunderlich, but for others, the very spareness of his timbre, allied to superb command of phrasing and textual nuance, was more than sufficient compensation.

Wagner may not have seemed obvious territory for a singer of such refined sensibilities, but in fact his Loge and Mime in the Ring, and David in Die Meistersinger, all preserved on disc, demonstrated an accomplished range of characterisation. As Mime in Marek Janowski’s recording of Siegfried, for example, he endowed the malevolent dwarf not with a whine but with a plaintive, wheedling quality, capturing his anxiety as much as his craftiness.

Born in Meissen, he entered the Dresden Kreuzchor in June 1945, just a few months after the fire-bombing of the city. Graduating to the Musikhochschule there for vocal studies, he went on to join the Dresden State Opera school in 1959, making his debut as the First Prisoner in Fidelio in 1961. In 1963 he became a member of the Berlin State Opera, but it was not long before he was singing at leading houses across Germany and Austria (his appearance as Tamino in Vienna was the first of more than 200 there), including the Salzburg and Bayreuth festivals. His debut at the latter in 1966 came under Böhm as the Young Sailor in Wieland Wagner’s production of Tristan und Isolde.

In 1973 he undertook the role of Loge in Karajan’s Das Rheingold at the Salzburg Easter festival. The lively enunciation and scintillating characterisation of his subsequent recording of the latter role for Janowski perfectly convey the demigod’s devious wit, putting Schreier’s performance on a par with Theo Adam’s Wotan and Yvonne Minton’s Fricka. Other significant operatic roles included the title role in Hans Pfitzner’s Palestrina.

The music of Bach remained central to his career, however. His Evangelist adorned the recordings of the St Matthew Passion by the Mauersberger brothers, Rudolf and Erhard (the former directing most of the choruses, the latter the solos), Karl Richter, Abbado and Karajan. For Helmuth Rilling, among others, he recorded the St John Passion and the Christmas Oratorio. Many Bach cantatas were recorded with the Leipzig Thomanerchor and Gewandhaus Orchestra, conducted by Erhard Mauersberger, others with Karl Richter. He also performed regularly in concert works by Handel, Haydn, Beethoven, Berlioz and Mendelssohn.

Having made his debut as a conductor with the Berlin Staatskapelle in 1970, he continued intermittently to take the podium with orchestras including the Vienna and New York Philharmonics, often conducting Mozart and Haydn.

When he retired from the operatic stage in 2000 he continued for several years as a concert singer and also as a conductor, sometimes combining the functions. In a 1988 recording of the St John Passion he not only sang both the Evangelist and the solo tenor arias but also directed the whole,