The History of Set Svanholm 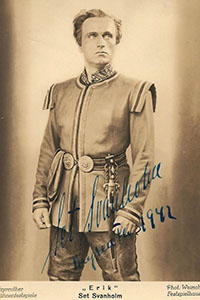 Svanholm began his musical career at the age of 17 as a precentor, elementary school teacher, and organist.
He then studied at the Royal University College of Music in Stockholm as well as taking singing lessons from the famous baritone John Forsell, who also taught Aksel Schiøtz and Jussi Björling.