The History of Ferruccio Tagliavini 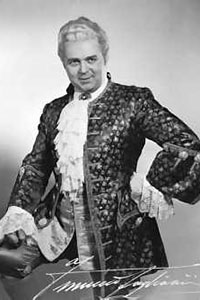 Tagliavini was hailed as the heir apparent to Tito Schipa and Beniamino Gigli in the lyric-opera repertory due to the exceptional beauty of his voice, but he did not sustain his great early promise across the full span of his career.

Tagliavini studied in Parma with Branducci and in Florence with Amedeo Bassi, a well-known dramatic tenor of the pre-World War I era. It was also in Florence that he made his professional debut in 1938 as Rodolfo in La bohème.

During the 1950s, Tagliavini took on heavier roles such as Riccardo in Un ballo in maschera, Cavaradossi in Tosca and Faust in Mefistofele; but the quality of his voice suffered as a consequence.

Tagliavini retired from the stage in 1965. He continued, however, to give recitals until the mid-1970s. He left behind an impressive discography. The finest of his recordings are those that he made of operatic arias during his heyday in the 1940s. In them, one can fully appreciate his remarkable skill at soft, or mezza voce, singing. He also made a few opera films, notably Il barbiere di Siviglia in 1946 with Tito Gobbi and Italo Tajo.

Tagliavini married the soprano Pia Tassinari in 1941. He made several recordings with her and they appeared together often on stage. There is a recording available of them singing Massenet’s opera Werther.