The History of Anton Dermota 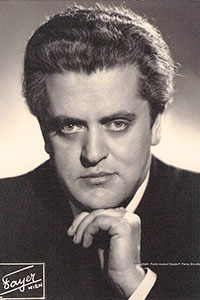 He was born in Kropa (Slovenia) grewing up in poverty. Initially studying composition and organ at the Ljubljana conservatory, he received a scholarship in 1934 which took him to Vienna where he devoted himself exclusively to vocal studies with the famous coach Marie Radó.

He made his early debut at the opera of Cluj (Klausenburg). It was Bruno Walter who immediately invited him to the Vienna State Opera where he made his debut in 1936 as first Man in Armour Mozart’s The Magic Flute.

His first major role was Alfredo in La Traviata in 1937. He remained a loyal member of the Staatsoper for more than 40 years (!) and became one of the most popular and celebrated singers by the Viennese public. He also gained tremendous popularity at the Salzburg Festival where he appeared regularly for 20 years.

His repertoire was wider than is often remembered and his recordings give proof of this versatility.
He was perhaps most renowned for his Mozart roles, such as Don Ottavio, Ferrando, Tamino and Belmonte. He also sang Jacquino, Cassio, Nurredin, David, Alfredo in Fledermaus and La Traviata, Rodolfo, Lenski, Des Grieux, Flamand in Capriccio, Oedipus in Stravinsky’s Oedipus Rex, David, Hans in The Bartered Bride, Narraboth, Leukippos, Hoffmann and Elemer in Arabella.

Later he occasionaly ventured into the youthful “Heldentenor” repertoire, singing the title role in Smetana’s Dalibor, Max in Freischütz and Laca in Jenufa. In 1955 he appeared as Florestan in the inaugural performance of the rebuilt Staatsoper with a splendid cast. His repertoire included all together 80 roles!

His interpretation of the title role in Pfitzner’s monumental opera Palestrina was well remembered by the Viennese public for many years. He was engaged at the operas of London, Paris, Rome, Naples, Teatro Colón and toured Australia, Czechoslovakia and Hungary. Dermota was an accomplished lieder singer and gave hundreds of song recitals accompanied by his wife, the pianist Hilde Berger-Weyerwald.

In 1966 he became a sought-after singing coach at the Wiener Musikhochschule. In honor of “Kammersänger” Anton Dermota’s 70th birthday, the management of the Vienna State Opera invited him to appear as Tamino (which he sang with a voice unimpared).