The History of Jacques Urlus 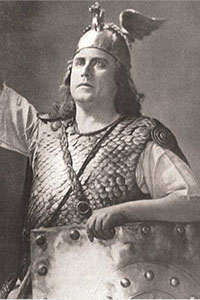 Narrative 1
The Dutchman was Jacques Urlus, whom James Dennis, the late and reveared editor of the record collector for 30 years, has described as the greatest vignating tenor of a century along with Melciurre. They began by spending five years as principal tenor at the Netherlands Opera and from then on, made Liebrick his main base from 1900 until well into the 20s, appearing as guest artist during that time in Berlin with Lily Leyman, Munich, Bresdin, Antwerp, Brussels, Vienna, Prague, and Riga.
His Covent Garden debut took place in February 1910 as Treastan and Sir Thomas Beecham mentions his performances in his book, A Mingle Chem. Noting, that comparatively unknown to Londoners was Litvine and Urlus. Between them, gave the most vocal rendering of Tristan and Isolde that any of us had heard since his famous performances of Jean Direscie. He was to appear at Covent Garden again in 1924, for the first post war grand opera season, when he sang Treaston. So, let’s hear him first in his natural element, Wagner Siegfried.

Narrative 2
Urlus made his first American appearances at the Boston opera in 1912. After successful appearances at Bayreuth the year before. His debut in Boston was in Treaston with Gadskie, Homer and Ammato, and he sang there also with Nordica and Marzina. It appears, by the way from his autobiography, that the two singers who most impressed him during his long career where, Lillileiman and Nordica.
Now the metropolitan called, and he made his first appearance there in 1913, when he joined the German wing of the company. During his Four Seasons there, he sang with all of the great artists of the day, including Fremestadd, Homer, Mazineure, Ganski, Hemple and Destin. The intervention of the first World War ended his metropolitan appearances, as German Opera was not tolerated in the United States at this time.
John Stein commenting on his records, has this to say; “Jacques Urlus, almost forgotten today, must have been one of the best singers of a century. His voice was powerful, evenly produced throughout its range, sonerous, and full bodied in tone. Everything he did was musical, and his versatility was exceptional.”
Regarding this versatility, Stein comments that among the excerpts from Italian opera, his record of Otello’s death is outstanding. A soft voice, sad toned opening, the ring and dark baritonal sound of the voice, proclaim an ideal Otello voice. The drama of the piece too, is beautifully captured, full of yearning and passion. And no additional death noises to spoil or dignity of this genuinely noble portrayal

Narrative 3
One of his last performances would have been in the summer of 1933 at the age of 67. He was engaged for an open-air concert in Munich, and was driven there by his sister Maria, and on arrival at The Four Seasons hotel saw a play bill for the concert in the hall.
Accustomed to seeing his name in large letters, and it not being apparent, on close examination he found it in very small print at the bottom. Full of indignation, he contacted the director, but the director said,” but you see Her Kahmeslanger, the names are given alphabetically and as yours start with a ‘u’ it is at the bottom. But Urlus countered, with the fact, that one starting with ‘z’ stood above him.
Stuttering, he got back, “but you see Her Kahmeslanger, you must know that the Fuhrer and Richt Minister Goble’s will visit the concert and they would surely be scandalised if the name of a foreigner was at the top of the programme. “The Fuhrer” said Urlus, and a deadly silence fell on the hotel hall. “Your Fuhrer means nothing to me”. Impolitely actually meaning something to do with muck. “And if the bill is not altered in an hour, I’m returning to Holland”. It was not and he left. Game and a bit of streferess to the end. In 1934 Urlus underwent an operation and died unexpectedly on July the 6th 1935.
As a final tribute and again to show his versatility, here is his Flower Song from Carmen made for the gramophone company in 1912.