The History of Cesare Valletti 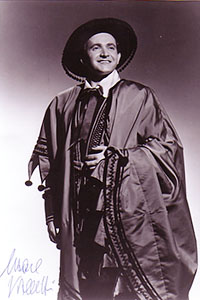 Born in Rome as son of a physician, he studied with the legendary Tito Schipa and made his debut in Bari as Alfredo in La Traviata in 1947.

He gradually built up his lyric repertory and appeared in smaller opera houses throughout Italy. He deputed as Fenton at La Scala in 1950.
In the same year he was invited to sing in Rossini’s Il Turco in Italia opposite Maria Callas and Mariano Stabile. He triumphed as Elvino in Bellini’s La Sonnambula opposite Maria Callas (1955). conducted by Leonard Bernstein.

His U.S. debut took place in San Francisco (1953) where he sang his first Werther. In 1958 he partnered Maria Callas again in a stunning performance of La Traviata at Covent Garden. Don Ottavio, Ernesto, Alfredo, Ferrando, des Grieux, Nemorino, Lindoro and Don Ottavio were considered to be his finest achievements and he sang them in all the world’s leading opera houses. He was a regular guest at the Festivals of Glyndebourne, Aix-en-Provence, Verona and at the Maggio Musicale Fiorentino where he sang in a variety of operas such as La Donna del Lago, Idomeneo and La Gazza Ladra.

Valletti’s career at the Met lasted until 1960 (he had sung 79 appearances and another 35 with the company elsewhere within two seasons!), when General manager Rudolf Bing removed him from the cast of a new production of L’Elisir d’Amore.
Offers by the Met inviting him to reappear were turned down.
Valletti was admired at the Salzburg Festival where he sang not only Don Ottavio but gave also fine song recitals (also in German and French).

He gave up his career in 1968, his last role was Nerone in Monteverdi’s L’Incoronazione di Poppea at the Caramoor Festival. After retirement, he was invited by his father-in-law to join the family business and he eventually became one of its directors.

Valletti was married to a granddaughter of Ildebrando Pizzetti, Italian composer of a variety of operas (the best-known is Assassino nella Cattedrale).

Cesare Valletti died of a heart attack while under treatment for liver cancer.