The History of Leon Campagnola 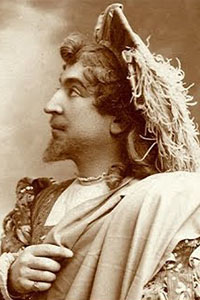 I find I have very little to say about our 1875 Tenor, the Frenchman, Leon Campagnola, because despite a frantic search, I have been unable to uncover some biographical details, I thought I had on this fine singer.
He was born in Marseille, on Feb 8th, 1875, and his early career was spent establishing his reputation in Belgium and the French provinces.  An important step was his contract as leading tenor at the royal Antwerp opera, that he enjoyed enormous popularity.  Then in 1913, came at the big moment in any French singers’ career, his debut at the Paris Opera.  And his success there establishes his position as a leading French artist of the period.

At the opera, he sang such operas as Pagliacci, Tosca, Carmen, and Arodiac.  He also sang in the Paris premier, of Ulva Ferrari’s jewels of the Madonna, which you may remember, was created by one of our earlier singers, Eduardo Ferrari Fontana.
Here successful appearances at La Scala, Milan, before securing a contract with the Chicago lyric opera.  But he was a regular companion of Mary Garden, a great Scottish soprano, then at the height of a success, as a singing actress.

The last information I have of him, is of performances at Theatre de Lamoni in Brussels.  Perhaps a fitting end to a career, as he was particularly admired in Belgium.  He died in 1955, aged 80.
Campagnola recorded for Pathe, and the Gramophone company between 1909 and 1919.

And I have selected two items, which seem to me to give a good idea of his voice and style.  In reverse order for a change, comes a 1919 recording, of an aria from a long forgotten French Opera A-Duci Moulin by Bruno and then we’ll go back to 1910, for the lovely aria Air De Jean from Massi’s opera, Herodiade.