The History of Léon Escalaïs 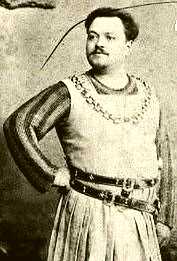 Narrative 1
But another and more famous French dramatic Tenor, the direct successor in fact, two great predecessors Neurite and Dupree was Leonce Escalais. Born in Toulouse in 1859. To begin with, he travelled. And soon achieved a reputation, not only in France but in Belgium and Italy, and La Scala in 1888. And in America and French speaking New Orleon. He specialised in all the traditional roles, made famous by Neurite and Dupree, the Tenor lead in Les Huguenots, Robert the Devil, La Frecain, La Jueve etc. As he was more the singing actor, rather than actor singer, and as his high C was the jewel in his crown, we could imagine him to be more like Dupree rather than Neurite.
John Stein had this to say about his records.
Escalais’s records made in 1905 and 1906, are famous among collectors for the brilliance of sound. No question of a dim likeness, darkly penetrating the old wax every now and then, but an almost startling face to face encounter with a singer of astonishing power. His high notes, for those interested in such unfashionable things, were among the most brilliant recorded. The aria from Verde’s Opera, I’lombarde is a prize example. It stops C sharp, taken with almost incredible ease and boldness. But Escalais was more than a singer with a loud voice and stentorian high notes, as the same record shows very well. Like Calausau and other masters of the graceful spell, he was a product of the 19th century and the evenness of production, the seamless voice, effortlessly steady, the readiness of the instrument to execute an embellishment gracefully or to drop to a sweet stone softness are all impressively heard in the Verde Aria.

Narrative 2
Stein continues.
Perhaps finer still, is the Sicilienne, from Miibieres Opera, Robert the Devil. The first part of this is a rollicking martial peace and one wonders why Sicilienne. But the jogging 68 of the second half provides the answer and also an opportunity for the singer to show his command of contrasting styles. Escalais does more than this, he shows how, with the voice of an Otello or one would think a treason, it may still be possible to sing runs with a full voice, perfect cleanness, and agility. How with such range and strength, may still be moderated to take a high note ‘mezavoche’ how an heroic Tenor may be able to trill on a long note and make a crescendo on it too.

Narrative 3
John Stein concludes.
Escalais has left us some of the most exciting of tenor recordings and as demonstrated one important lesson, that the heroic Tenor can move with as much ease and grace as a coreturo soprano. It lies in the training and in the conception of an ideal elegance to be kept in view. So let us take our leave of him by playing a record from that old War Horse of Neurite and Dupree, William tail.

Narrative 4
Time on this tape for one more, so I have chosen Rodrigos Aria from Le Cid by Masne