The History of Karl Erb 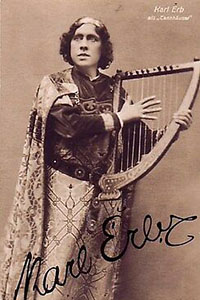 Narration 1
Karl Erb was a German tenor, who was particularly interesting to us, because his career was quite clearly divided into two halves. Much like that of John McCormack. Firstly, as an important opera singer and then as an outstanding concert leader singer.

He was born in southern Germany in 1877, at Ravensburg.
He was illegitimate and had a very hard upbringing, which probably helped him later in life, as a leader singer, being well able to express the poverty, loneliness, yearning, and sorrow, that characterised some of these songs, by knowing exactly what it was all about.

He worked very hard indeed to become a minor state official by the age of 25. And when he was promoted to chief cashier for the town gas and waterworks, he assumed he had reached the summit of his career.
In 1902, the Court Theatre at Stuttgart burnt down. The small town official Erb, when he read the news, little realised the effect this would have on his future. The court theatre company began touring, awaiting the rebuilding of their theatre, and when they visited Ravensburg, they needed some extra voices for the chorus, and the locals, knowing that Erb had a fine voice, coaxed him to sing.
He immediately attracted the attention of Barron von Cutlitz, the general attendant of the theatre, and was invited to come to Stuttgart, Erb had been discovered.
He was very reluctant at first, to leave his safe town officials’ job, that he had worked so hard to achieve. And he was at 30 years old before he finally decided to take the plunge and go for singing full-time, making his debut in Stuttgart in Ivan Gellman in 1907.

He sang at Stuttgart until 1912, before joining, what we would call, the big time at Munich, then under the direction of the greater Bruno Walter. This was the start of a relationship, for they were to become great friends, as well as colleagues.

Here then, is a record from those early beginnings. From 1912 an extract from Mignon, Anambra Avtomat

Narration 2
When Caruso sang Pagliacci at Munich, it was Erb who sang Taurido, in the inevitable Cavalleria Rusticana double bill. He also got his chance to sing his first Mozart, Balbir, in the Solaria, Costa van Toute and Don Giovanni.
A rarity was of Valls De Corregidor, an expensive choice, for when Erb took ill suddenly, entrance money had to be refunded, as no other tenor could be found in the whole of Germany, who knew the part.

1916 was an important year for Erb, he sang in the premier of Convolz, the Ring de Polekratis with Maria Ivogun, whom he was later to marry. And then in 1917, his most famous assumption, that of Paris Pinner in Fisto’s opera of that name, which he created on June 12th under Walter’s direction.

During the next few years, the partnership of Erb and Ivogun became famous at Munich, and they eventually married in 1921. The marriage was to last ten years, the first seven as an outstanding partnership, unfortunately doomed to deteriorate and end in divorce.

The golden years were certainly brilliant, and both on stage and in concert, the sold-out notices were quickly in evidence when they appeared together.
In the opera, they appeared together in Don Pascale, the Barber of Seville, Tzar, Zimmern, Martha, the Merry Wife of Windsor, Franchot, Mignon, Falstaff, Rigoletto, Palischena, Ariadne, Boehme, the Tails of Hoffman, the Magic Flute, Coze Fantoute, Don Giovanni and the Seraglio. And in concert, duet from the Italian operas, from songs and arias by Handle, Schumann, Schubert and of course the inevitable Hoch songs.

Let’s listen in for a few moments, then, on a snatch here and there for their performances together. A very rare privilege indeed because of one exception, the original recordings were never ever published

Narration 3
The reputation was spreading, Salzburg heard him in 1925, in Covent Garden in 1927.
Erb travelled with his wife on her tour of America in 1926 but refused all offers to sing himself.
Mengelberg, the famous conductor, then in New York, tried to entice him, first with a thousand dollars per performance and finally at $2500 a performance, plus a contract with the Brunswick recording company.
All to no avail. Erb would not let his European conductors down. That friendship with Walter probably counted here. And he left his wife to continue her tour, while he honoured his engagements in Europe.

It was during one of these engagements in Brenham, that Erb had the misfortune to break his right leg and then after an engagement at la Scala, in Milan, he slipped on some steps when swimming alone, and broke his left leg. It was some time before he was discovered by his wife, and he was a very sick man indeed for some months.

Now 52, and unable to move as freely as before, he decided it was time to give up the operatic goals, which were essentially written for young heroes or lovers, and to concentrate on the German art songs, veliger.
His last operatic appearance was a fitting one, of the Berlin, Charlottenburg opera as Florestan in Fidelio under Furtwangler.

Narration 4
And now began a second career, as a concert artist, that rose to the greatest possible heights, in this particular field.
He ranks as one of the greatest interpreters of German song along with such as DeHart, Lehman, Schumann, Schwarzkopf, Bush, Kipnis, and Fischer Nechako. And he continued singing these songs to the end of his life, which occurred in 1958.

His recording career falls neatly into two parts, just like his stage career. He made 65 sides for Odeon, starting in 1911 and ending in 1917, during his operatic days. Then, 60 sides for the Gramophone company published at Electrola and HMV, recorded allegedly from 1934 to 1951, during his leader period.

We must leave him then, with an example from his German song, taken from his very last recording session in December 1951 at the astonishing age of 74