The History of Aureliano Pertile 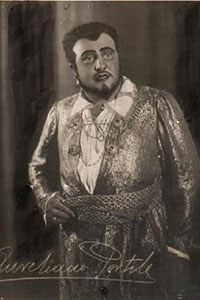 Aureliano Pertile came to be Toscanini’s preferred tenor at La Scala during the 20’s, and was probably the most loved and famed tenor within Italy during this era, having abandoned the country all Caruso’s successors, such as Gigli, Martinelli and Lauri-Volpi.

Pertile thus came to symbolize a La Scala in opposition to the Italianesque Metropolitan Opera of New York. Unlike his contemporaries, Pertile had no extensive collaboration with the Met in New York, neither with any other major opera company outside Italy.

His popularity within Italy, however, made him the chosen tenor for creating Nerone for Boito at La Scala (1 May 1923) and Sly for Wolf- Ferrari also at La Scala (29 December 1927). Here he was often praised for his musical intelligence and his skilfull use of a huge, metallic but not considerably beautiful voice.

His impressive stamina and vocal reserve allowed him to excel in roles such as Lohengrin, Andrea Chenier and Otello.