The History of Tito Schipa 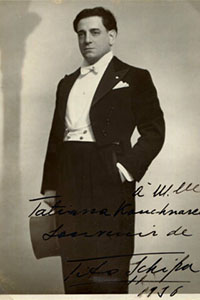 Tito Schipa is lauded – often on liner notes of recordings – as a master of bel canto. It’s not strictly true – he was several generations removed from the pure bel canto period, and now the emphasis had shifted from pure vocal production to dramatic interpretation.

His manner of singing is graceful, even delicate, but it is with his presentation of the text that he seduces the listener; musically, there isn’t much tension (and thus little contrast, and ultimately no resolution) in his execution of the music, the placement of the breath.

With his contemporaries all singing the macho, muscular roles of verismo opera, Schipa offered a sweetly old-fashioned, romantic approach to Rodolfo, Turridu, and Cavaradossi – and if much of that latter role was beyond his abilities, he still made it quite charming.

Schipa was born in Lecce, southern Italy, at the very end of 1888. A census which registers his birth as 2 January 1889 was the result of a deliberate ploy on the part of his father to delay his son’s entrance into military service for an extra year. Schipa’s musical studies included piano and composition, before the town bishop offered financial suport for further studies in Milan. He made his operatic debut in 1909 as Alfredo in one of those performances where everything that could possibly go wrong, did.

Schipa was a perfectionist when it came to music, and at the same time, extremely practical about both what he could and could not do. He chose to specialize in operas ideally suited to his voice – perhaps about a dozen roles. And although his voice was lighter in weight and dramatic color than that of Caruso, Gigli, Martinelli, or Tauber, he was able to project it in the largest opera houses. Throughout the 1920s and early 1930s, Schipa performed primarily at Lyric Opera of Chicago, the Metropolitan Opera, and La Scala, Milan.

Adapting quickly to the American way of life, he became one of the highest paid artists in the United States, and embraced the celebrity lifestyle, making headlines with his roles in the new talking pictures, his amorous exploits, and the unbelievable amounts of money he earned and carelessly squandered.

Schipa retired from the stage in 1958 to teach voice in Budapest. He died from diabetes in 1965 at the age of 77 in New York City, while teaching there.