The History of Karel Burian 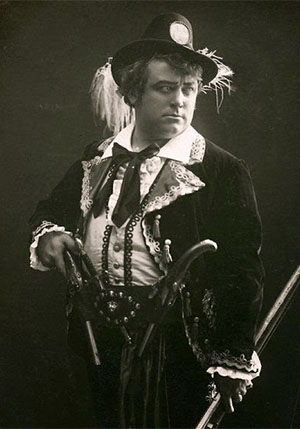 Narration 1
At the beginning of the present century, the newly formed gramophone companies, were deciding where to set up shop, to take advantage of the great operatic names, that would promote their business.
It should be understood, that in the absence of pop singers and dance bands, rock groups and country and western etc, that it was the big operatic names that sold gramophone records. Unlike today, when the group’s subsidize classical music.

Did Caruso make the gramophone was no idle question in those early days. Mention has already been made, of Gustav Mallors company at the Vienna state opera. Where a group of famous singers had assembled to form a regular company. So obviously, that was one place to set up a studio. Milan, London, Paris, New York, and Saint Petersburg were the other obvious choices. Warsaw was another.

Because all the great stars sang there on their way to and from Moscow and St. Petersburg. Another was certainly to be Dresden, because it was here, that another group of celebrated singers had also formed the regular company, a great rival faction to the Vienna ensemble, comprising such stars as Lapasca, Irene Arbindrot, Mini Nacht, Reins, Vonda Ostin, Erica Videocon, Al Scheid mantle, Von Barrie, Margarita Zimmes and for our own particular interest, the Czechoslovakian, tenor Karel Burian.

His debut was at Bruin on the 28th of March 1891 in Smetana’s opera The Bartered Bride and was a big success. He was offered an immediate contract and sang a Trovatore, Cavalleria Rusticana, Dalibor and other chezk operas there with some success.
He applied for a contract at Leimzik, sang there, but was not asked to stay on. A director promising him a successful future career in operetta. Commenting on his gangling physique, his most unclassical face and your nose. Well let’s not speak of that. Cologne thought differently, and he spent a successful season singing there before moving on to Hanover, and then to Hamburg, where he had a big success as a herdan Tenor in Wagner’s, Tannhauser.
A big personal wish was fulfilled, when he sang at the Prague National Theatre for the very first came in 1899. He sang as Tannhauser, Dalibor, Don Jose and a Checzk opera, called ‘The Dogheads’.

Suddenly in 1902 Dresden called, and there he was, in that august company, singing Tosca, Boehme, Pagliacci, Trovatore, Eugene Onegin, Butterfly, mastersingers and Carmen with all those illustrious names mentioned earlier.

So, we hear him first in the company of one of his Dresden colleagues Sebasco Frederic Plasche.

Narration 2
His Covent Garden debut took place in 1904 as Tristan. Later that season, he sang Tannhauser with Terina.
He returned again to Covent Garden in 1910 and 1914 to sing in Wagnerian roles.

Burian will remain in the history books for having created the part of Herod, in Richard Strauss’s then controversy opera, Salami, at Dresden in 1905. When the composer arrived to see the rehearsals, the usual efficiency Burian, was the only one who knew his part. Being controversial I suppose, everyone wanted to see the new opera.

And Burian was in big demand. First, Berlin then Cologne, then in 1907, the Metropolitan Opera, New York with Fremstadt and Vanoy. Then Paris with Embidestin, the only Czech singer most famous than he.
It was in 1908, he first sang at Bayreuth, that immense theatre, built specially for the production of Richard Wagner’s opera, the mecca for all Wagner’s worshippers.
He sang in seven performances of Paciafal there, then on to Vienna as a guest artist, Slezak would see to that. And again from 1909 and 1912 and 1913. Burin sang at Metropolitan Opera New York from 1906 to 1913 as part of the German wing of the company.
Urlus was an earlier example. But only non-vigneron parts he sang there, were in celimi and fidelo. And what a wonderful German wing it was, with partners including Nordica, Fremstradt, Gluck, Garstka, Amies and Destine, Matzner, Homer, Kirbilon, Lucciviette and with many of the performances conducted by Toscannini.

Another unforgettable occasion must have been the great charity concert given at the Paris opera in 1910, by the touring Metropolitan company. One act of Boehme with Caruso and Farrah, some Otello with Slezak and Alde. And the last act of Faust and the second act of Tristan with Fremstadt, Burian and Homer, all under Toscanini.
It was the first time that German had been sung in that house since 1870 ar.

Here he is in an extract from Masani’s opera, Werther.

Narration 3
Burian left America in unfortunate circumstances. His wife had taken mortally ill, while he was singing in Boston in 1913. And he had to leave suddenly when she died. This was the occasion when Ferrari Fontana stepped in, on an emergency and sang Tristan, half in German and half in Italian.
He sang it again two days later, this time in Italian, to the great relief of all concerned. Although he had won considerable success in America, Burian had not much to say in its favour.
American liberty was a myth, he declared. And he had some scathing remarks to make about opera in New York. The audience always arrived late, left early, and made the promenade, during the intermission, the highlight of the evening.

That the way Wagner was cut, was unforgivable. The first world war arrived and news of his activities became scanty. He sang most of the time in his native Czechoslovakia and visits to nearby, Vienna and Budapest.

His final appearance at the Prague National Theatre was in 1922, and he signed Dalibor and Tannhauser. He was making a farewell tour of Slovakia, when in the town of Nitra, a careless Barber, caused a violent infection, and despite treatment and Bratislava University Hospital, and then in Prague, he succumbed and died on September 25th, 1924.

Burian made 63 sides for the gramophone Company, six for Pathe and two for Parlaphone, spread between the years 1905 to 1913.
He did not enjoy recording and liked the results even less. Apparently, the Bresless studio is situated in a small room, at the Verba hotel, and this little to inspire our singer. He was a heavy drinker and reports suggests, he sometimes did not take recording too seriously.

It is appropriate here to mention the famous story, that during a performance of Lohengrin, he was perhaps more than a little tipsy. Failing to mount The Swan, to be carried off into the wings, he uttered the immortal words “What time does the next swan leave?” something of a poet, he himself tells us, what he thinks of his recordings. “My voice was not of glassy stone, though that’s what the gramophone captured. Today and forever, till sound dull, it’s difficult to can one’s soul.
Perhaps if he had been able to hear his records, as we can today, using the advantages use of modern technology, he might not have been quite so bitter.