The History of Charles Kullman 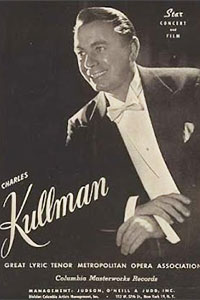 Charles Kullman was born in New Haven, Connecticut, and began performing in church choir at age eight.
He attended Yale University, studying medicine. However, after graduating in 1924, he returned to his first interest, music, believing he could succeed in making a career as a singer. He was accepted at the Juilliard School of Music on a scholarship.

After completing three years of study there, he won another scholarship, this one affording him the opportunity to study at the American University in Fontainebleau, France, with Thomas Salignac. Upon returning to America, he taught voice for a while at Smith College, and then joined Vladimir Rosing’s touring American Opera Company and began singing leading roles.

Two years later, Kullman decided to return to Europe. An associate brought his name to the attention of conductor Otto Klemperer, which led to his engagement at the Kroll Theater in Berlin, where he made his debut on February 24, 1931, as Pinkerton in Madama Butterfly. A year later, Kullman made his debut at the Berlin Staatsoper, where he became a favorite with the public. During his time there, he worked with Germany’s leading conductors, including Wilhelm Furtwängler, Erich Kleiber, Leo Blech.

The year 1934 saw Kullman making his debut at the Vienna State Opera, and the Royal Opera House in London. The following year saw his triumphant debut at the Salzburg Festival, as Florestan in Fidelio, conducted by Arturo Toscanini. His Walther in Die Meistersinger von Nürnberg, in 1936, again with Toscanini, won him further praise. He is heard at this time in the live recording of Das Lied von der Erde, with Kerstin Thorborg, under Bruno Walter, from the Vienna Musikverein (also 1936).

After having sung widely in Europe, Kullman returned to America for his debut at the Metropolitan Opera on December 19, 1935, in the title role of Faust. On December 8, 1939, he changed the spelling of his name from Kullmann to Kullman.

In twenty-five seasons at the Met, his roles included Don Jose in Carmen, Pinkerton, Walther, Ottavio in Don Giovanni, Avito in L’amore dei tre re, Eisenstein in Die Fledermaus. He later took on character roles such as Shuisky in Boris Godunov (opera) and Goro in Madama Butterfly.

Essentially a lyric tenor with an unforced freshness, Kullman had enough steel and authority to successfully undertake weightier roles, ranging to Tannhäuser and Parsifal.