The History of Marcel Wittrisch 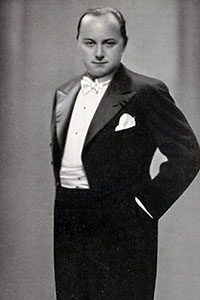 Wittrisch was born in Belgium to a German family, and subsequently studied in Munich, Leipzig and Milan. His career began in Halle, Saxony-Anhalt in 1925 in a production of Hans Heiling by Marschner. He then went to Brunswick and on to Berlin, where he sang opera from 1929 to 1944. Wittrisch also appeared as Eisenstein in Die Fledermaus at the Royal Opera House, London in 1931.

The fact that Wittisch was able to carve out a fine career in the face of competition from such renowned German tenor rivals as Richard Tauber, Helge Roswaenge, Franz Völker, Julius Patzak and Peter Anders, among others, testifies to his talent.

Wittrisch’s singing in its prime period during the 1930s was characterised by a fresh, gleaming tone and easy top notes. As his voice matured, he undertook heavier operatic roles such as Wagner’s Lohengrin in 1937 at the Bayreuth Festival and eventually Siegmund and Parsifal after the Second World War.