The History of Joseph Rogatchewsky 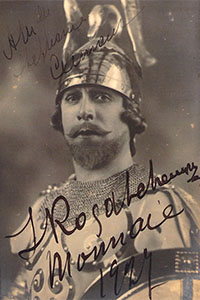 “Among the illustrious group of French-trained tenors before the public in the pre-war years, Joseph Rogatchewsky was one of the most highly regarded. Indeed, many vocal connoisseurs considered him to be the finest of them all. From a purely vocal aspect the quality is warmer, more distinctive, and with less vibrato than the tenors with whom he shared a similar repertoire.

Making his operatic début in Toulouse in 1922, appearances at the Paris Opéra-Comique led to a contract with La Monnaie in Brussels, where he speedily became their leading lyric tenor. Such is Rogatchewsky’s artistry that his singularly attractive voice has a warm, very slightly throaty quality that brings the great Giuseppe Anselmi to mind. Dynamic markings are scrupulously obeyed, and his soft, well-supported head tones have rarely been equalled. These are particularly praiseworthy and apt in a glorious rendition of the famous air from Le Roi d’Ys. As might be expected, the tenor is very much at home in the Russian excerpts. Arias from May Night and Prince Igor are splendidly sung in the original language.”