The History of Lauritz Melchior 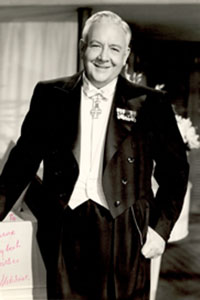 The son of an innkeeper, Tamagno studied at Turin as a pupil of Pedrotti. He began his career in the choir of the Teatro Regio at Turin (1870), singing minor roles as well. In 1873 he attracted attention with his powerful B in the role of Nearco in Donizetti’s Poliuto. He sang his first principal role in the year 1874 at the Teatro Bellini in Palermo (Riccardo in Un ballo in maschera). That same year he also sang Roberto il diavolo at Rovigo and in Il Guarany, Poliuto, Lucia di Lammermoor, and Franco cacciatore at the Teatro La Fenice, Venice.

The press reports of the time credit him with a firm, bright voice with squillanti high notes reaching high C. A critic of his Edgardo said that even though he possessed a good mezzavoce, he preferred to sing throughout using full voice.

Tamagno made his international debut at Barcellona’s Liceu in the 1875-76 season, and in 1877 made his first appearence at La Scala as Vasco da Gama (L’Africaine). This was the beginning of a major career at La Scala: during the following season (1878-79) he sang in Don Carlo (title, role) and in Massenet’s Re di Lahore (Alim), and created the role of Fabiano in the premiere of Gomes’ Maria Tudor. In the next season followed Ernani, Simon Boccanegra (Adorno) and Il figliuol prodigo (in which he created the role of Azaele). In the 1883-84 season he sang again in Ernani, then Meyerbeer’s Ugonotti and Il profeta, followed in 1884-85 by Mefistofele (Faust), Il profeta and Ponchielli’s Marion Delorme (creating the role of Didier).