The History of Léon Laffitte 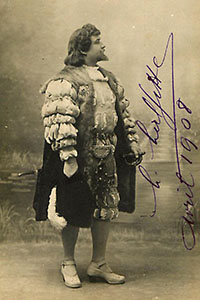 He made his debut (1898) at the Paris Opéra as David in Die Meistersinger. He sang for fifteen seasons at the Monnaie in Brussels where he was a great favorite. In 1904, with piano accompaniment, Lafitte sang excerpts from Sylvio Lazzari’s opera- in-progress, Armor, for Prince Albert. The Prince, who was not at all pleased at what he heard, promptly dismissed the opera. Laffitte was not a top-tier tenor, showing, at times, unevenness in his singing.