The History of André d’Arkor 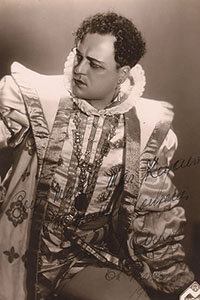 Born in Tilleur near Liège (Wallonia), André d’Arkor received vocal tuition by Henri Seguin and Malherbe at the Liège Conservatory.

He made his debut as Gérald in Délibes’ Lakmé at the local opera house in 1925 and subsequently appeared in the leading tenor roles in La Bohème, Hamlet, Thaïs, Lucia di Lammermoor etc.D’Arkor eventually sang at the Royal Opera in Ghent where he was contracted for three seasons, gradually building up a repertoire of 80 roles! He debuted in Lyon in 1929 as Belmonte in Mozart’s Die Entführung aus dem Serail. In 1930 he was invited to the Théâtre de la Monnaie in Brussels, where he sang Faust and Des Grieux.

It was at the La Monnaie he celebrated the greatest success of his career and established himself as an excellent interpreter of lyric and dramatic roles. D’Arkor was to become one of the most important members of the company until the end of his career. In the 1930s, at the peak of his career, he toured the United States, Holland, Germany, France and Switzerland and made a number of records for Columbia, while continuing to appear at the opera houses of Brussels, Ghent and Liège.

A problematic relationship to the Flemish soprano Clara Clairbert and World War II restricted his singing career, and in 1945 he retired from the stage to take up the position of a director at the Opéra Royal in Liège (1945 to 1965).