The History of Anatoli Orfionov 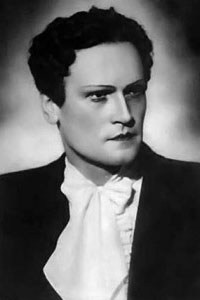 Anatoly Orfionov ( Anatoli Orfionov) was born in 1908 in the village of Sushki Ryazan near the city of Kasimova.
The family had eight children but only Anatoly became a professional singer. “We lived with the light from kerosene lamps. There was no entertainment, except once a year at Christmas when there were amateur performances. We had a gramophone and I listened to the discs of Sobinov who was for me the most favourite actor; he I wanted to emulate”.

His father died in 1920. In 1928, Orfionov came to Moscow and found a place in the class of Alexander Akimovicha Pogorelskogo, follower of the Italian school of belcanto.

Working with the major masters of Russian musical art finally shaped Orfionov into an ‘individual’ actor. He rapidly gained a leading position in the Opera House troupe named after Stanislavsky.
The audiences noticed his naturalness, sincerity and the simplicity of his stage acting.
For many years Stanislavsky harboured the idea of a new production of Verdi’s “Rigoletto”, and in 1937-38 he started. Eight rehearsals were held; however, for several reasons (political?), work on the production stopped, and it was not finished until after Stanislavsky’s death, under the leadership of Meyerhold, the chief director of the Theatre then.
How exciting Orfionov found working on “Rigoletto” may be judged by his memoirs: Anatoly Orfionov “First Steps”, published in the journal “Soviet Music” (1963).

Following a great success as the Duke, Orfionov appeared as Lukova in “The Tsar’s Bride”, Yurodivogo in “Boris Godunov”, Almaviva in “The Barber of Seville” and Bahshi in the opera “Darvazskoe Valley”. Orfionov was made Honoured Artist of the RSFSR, and took part in several landmark productions including “La belle Helene” in Paris – this, fortunately, was recorded on the radio in 1948. In the 1940/41 season Orfionov joined the State Opera ensemble, under the leadership of the great Ivan Kozlovsky. Performances were in the Great Hall of the Conservatory, the House of Scientists, the Central House of Artists and Student town. Alas, this ensemble did not last long, as WW2 came!

Orfionov was considered a specialist in Western European repertory: the refined and gallant Almaviva in “The Barber of Seville” (in this opera Orfionov established a unique record by performing it 107 times). In contrast, his characterisation of Alfredo (“Traviata”) clearly moves from timid young man to an angry one, but in the final Act becomes deeply repentant and distressed. French repertoire was represented by “Faust” and the comic opera “Fra Diavolo”. He also performed in “Don Giovanni” and “Fidelio” (this with the young Vishnevskaya).

Orfionov specialised in the role of Lensky: delicate, transparent timbre, softness and flexible, his Lensky is described as “highly complex and fragile”. Another milestone was the image of Yurodivogo in “Boris Godunov”. In this landmark performance in 1947, he sang in front of Stalin.

His voice was considered ‘radiogenic’. 1950 began the heyday of the opera broadcast. In addition to well-known scores, many forgotten and rarely performed opera pieces were broadcast, such as “Voevoda” and “Oprichnik” Tchaikovsky; the names of Zary Doluhanovoy, Natalia Christmas, Deborah Pantofel-Nechetskoy, Hope Kazantsevoy, Georgy Vinogradov, Vladimir Bunchikova became well known.

In 1950, Orfionov started teaching activities in the Gnessin Institute. He was a very understanding teacher: “he did not impose, not force to imitate, but every time the individual capabilities of each student [were taken account of]”. He enjoyed taking a ‘mediation’ position between management and soloists, and perceived as a father-figure for singers, especially the young.

He died in 1987 and is buried at the cemetery at Vagankovskom.