The History of Fernando De Lucia 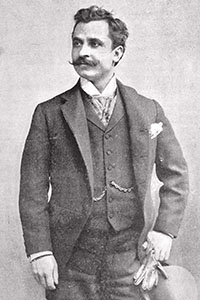 Narrative 1
Of all the early gramophone records made by the Tenor, perhaps the most fascinating, if not the most important, must be those made by the Neapolitan, Fernando de Lucia. Born in 1860 and only 13 years older than Caruso, De Lucia now appears to be the only Tenor to show the vani style of the golden age with a large group of records made whilst still in reasonably prime voice. In the period 1902 to 1922, De Lucia made some 400 records for three firms. The gramophone and typewriter company, (the famous of G and T’s), Phonotapaya and Phonotype. In them, we note the fascinating virtuoza technique and the sensitive and expressive treatment of the older repertoire of Bellini Rossini and Donizetti. Desmond Shaw Taylor said of these records, they’re unlike anything else in the annals of recording and worthy of the closest study, both for the historical interest and for the fascinating spontaneity and originality. Let’s hear him first then in perhaps his most famous role Almavera in Rossini’s Barber of Seville – Ecco Ridente

Narrative 2
I have chosen this next De Lucia record because it shows him in one of Juliana Gary’s famous roles, The Pearl Fishers. And because he was often compared to the great Spanish tenor, who unfortunately died before the gramophone was invented. So not only can we enjoy De Lucia’s wonderful performance with the Spanish soprano Ugi, but we can perhaps imagine the ghost of Gary approving and applauding the performance, I certainly do.

Narrative 3
A bit of fun now, from Eluci Demore by Donizetti. Obligato! Obligato!
A comment from Desmond Shaw Taylor. The absolutely even singing in this duet, in thirds, and the long rubato and diminuendo as the two voices lie poised on G&E, finding the tone away with perfect unanimity to the merest thread, represents traditional opera buffa style at its most musical. When Le Scala company brought Elucie Demore to London in 1950, Tallianine Italo made very little effect with this delightful duet, because he took it quite straight, without those hesitations and playful touches which are the life and soul of such music.

Narrative 4
One must certainly include a Neapolitan song, as no one ever sang them quite like De Lucia did. He was of course Neopolitan by birth and is justly famous conditions, seemed to me, to catch the flavour of the Naples of a century ago. Just one cornetto 1909 verse.

Narrative 5
It is not to be assumed that De Lucia was simply and slowly a master of the old school. On the contrary, his most popular London appearances where, in fact, in the new verismo Operas such as Pagliacci and Fedora, showing the singer to be a progressive artist and reflecting credit on his ability to adapt to the changing times. In 1917, a Tenor began to play an important part in the small Neapolitan recording company Phonotype, indeed he made two complete Operas for them, Rigoletto, and the Barber of Seville. Here he is, in his new verismo guise, at the age of 58 in one of his great London triumphs.