The History of Alessandro Valente 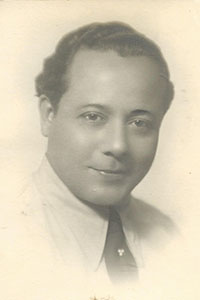 The career of Alessandro Valente is one of the strangest in recording history. For years he was the “mysterious stranger”, of whom it was only known that in the late 1920s and early 1930s he had made some outstanding records.His name became internationally known when HMV issued the first tenor arias from Puccini’s last opera “Turandot”, which had its world premiere at La Scala in 1926.

Not until 1927 did HMV issue the first recordings of “Non piangere Liu” and “Nessun dorma”. Against all expectations they were not sung by Miguel Fleta, the first Calaf, who was, moreover an HMV celebrity artist. The recordings were instead released on the humble “plum” label, sung by the totally unknown Alessandro Valente. As everyone wanted to own the two new Puccini arias, Valente became internationally famous overnight and proved a really worthwhile find. Innumerable versions of these two arias have since been made (unfortunately none by Fleta) but no-one has equalled the magic of these initial recordings.

They were recorded in England, the conductor being Manlio Di Veroli. Valente was immediately acclaimed as a “promising young tenor” and “new Caruso”. In·view of his popularity HMV immediately released two further arias, one of which – “Recondita armonia” is truly superb. Then came the duet from “Manofr Lescaut” opposite Emma Lattuada, the sister of the conductor Carlo Sabajno. Eventually Valente was contracted to sing Canio in the first electric complete recording of “I Pagliacci”, again under Sabajno, opposite Adelaide Saraceni, Apollo Granforte, Leonildo Basi and Nello Palai. Strangely enough this recording was again released on the “plum” label, although Granforte – a “celebrity artist” – normally recorded for the “red” label. That already marked the end of Valente’s international recordings. However, he went on to record some 25 cm records in Italy of arias from “Aida”, “Andrea Chenier” and “La Fanciulla del West”. For inexplicably reasons these records were not distributed outside Italy. Eventually he returned to England and recorded some popular songs for Decca.

Meanwhile the wildest conjectures were being made about the reason why this new tenor did not appear on the international opera stages – until such a time when someone actually took the trouble to find out the facts and solve the enigma. At the time of the “Turandot” recordings Valente was by no means a “young tenor”. He was born around 1890 in Turin, began as a boy soprano and appeared in Verona as a choir boy in “Tosca” and a street urchin in “Carmeri”.

He studied with one Louis Schweiwein and came to London in 1912 where he appeared at the Hippodrome as Turiddu in “Cavalleria rusticana” – the conductor being Mascagni himself. At the time Valente’s age was stated as being 17, which was undoubtedly a promotional ploy as, if he was indeed born in 1890, he must have been twenty-two. As it happened he was not successful but he remained in England and appeared in vaudeville shows – using the pseudonym “Alex Vallo” – during which he sang an opera aria. From 1915 to 1918 he served in the Italian army and subsequently continued his modest career, touring music halls and vaudeville theatres. It is quite possible that apart from “Valo” and “Valente” he also used other pseudonyms. In 1924 Luisa Tetrazzini engaged him as “supporting artist” for her farewell tour and he therefore returned to England. Perhaps Fred Gaisberg came encountered him at this time. Anyhow, none of the star tenors were available at the time when HMV wanted to record the Turandot arias and Gaisberg remembered Valente, who was again on one of his vaudeville tours: Valente thus made his first recording at the age of thirty-seven and became famous overnight. Other re­ cords followed, made in England as well as Italy, but he did not really manage to achieve an opera career.

All the speculations about the reason for this strange fact are totally untenable. One rumor would have it that he had a wooden leg and could not move easily on stage. This was obviously nonsense for in 1932, when he made the Decca recordings, he was appearing in vaudeville shows – ergo on stage. It seems that he was quite versatile for he also worked as an inventor. One of the most popular curtain racks on the market was invented by him.

lt should also not be forgotten that in the early 1930s he was over forty and had spent an exhausting number of years in vaudeville, often with four or more appearances a day. His subsequent HMV records and those for Decca prove an audible decline in his vocal powers. In fact he never again reached the surprising level of his first recordings, with the possible exception of the “Manon Lescaut” duet.