The History of Carlo Bergonzi 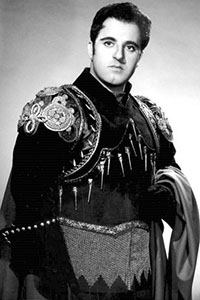 There was no finer interpreter of Donizetti’s, Verdi’s and Puccini’s tenor roles throughout his long career than Carlo Bergonzi, who has died aged 90. His singing of all three composers’ music evinced an innate sense of how to mould an immaculate line projected on a long breath, an exemplary clarity of diction, and an authoritative use of the particular style called for in interpreting a role. Over and over again, you could hear, and can still hear on his many recordings, how to shape a phrase and to do so with a voice of intrinsic beauty, flawlessly produced, so no effort seemed involved.

He eschewed vocal histrionics, and ensured that the expression was applied from within the aria or ensemble. Far from being a macho tenor, he was the aristocrat of the breed and as such universally admired, even if he did not evoke the visceral excitement of his near-contemporaries Franco Corelli and Luciano Pavarotti.
Sign up for the Sleeve Notes email: music news, bold reviews and unexpected extras
Read more

He was born in Vidalenzo, northern Italy, and looked likely to become a cheesemaker like his father until his voice was discovered (he was quoted much later as saying that tenors, like parmesan, are no longer allowed time to mature). After service in the Italian army during the second world war, and a period as a prisoner of Germany, he trained as a baritone and began his professional life in that mode, making his debut as Rossini’s Figaro, at Lecce, in 1948.

By 1950 he concluded that he might really be a tenor and retrained, making his first appearance in his new range in Giordano’s Andrea Chénier at Bari in 1951, the year he was also engaged to sing a tenor part in I Due Foscari for Italian radio celebrations of the 50th anniversary of Verdi’s death. The voice still sounds there a shade tentative, but by 1953, when Bergonzi made his debut at La Scala and appeared, as Don Alvaro, in La Forza del Destino at the old Stoll theatre, London, the transformation was complete. He was acclaimed as a new tenor of real worth.

In 1956 he made his debut, as Radames in Aida, at the Metropolitan Opera in New York, and continued to sing there for more than 30 years, evidence of the security of his technique and the fact that he was careful not to force his voice out of its natural range and strength. One of his last roles, in 1988, was Rodolfo in Verdi’s Luisa Miller, suitably enough as his account of the famous tenor aria in that opera was always a model of Verdian style.

He made his debut at Covent Garden as Don Alvaro in 1962 and London critics fell over themselves in his praise. He became an immediate favourite and returned many times, in his favourite Donizetti, Verdi and Puccini. On one famous occasion, he came down to the footlights, as Riccardo in the final act of Un Ballo in Maschera, just before the masked ball of the title, and delivered his farewell to his beloved starting Si, Riverderti, Amelia with such intensity and passion that the whole house erupted in a spontaneous round of applause. On another occasion, singing Radames at a prom at Covent Garden, with young people standing where the stalls usually were, he looked amazed at the end of the big ensemble in the Triumphal Scene of Act 2 at the sheer excited enthusiasm of the youthful reaction to music new to its listeners.

No great actor, Bergonzi made generous use of stock gestures, yet the singing had such passion and conviction that it was easy to overlook the rudimentary acting. He could also be casual on stage, leaving it as he once did in Ballo at Covent Garden to have a good cough before returning in time for his next entrance.

Bergonzi was just as affecting in a lighter vein. His Nemorino (L’Elisir d’Amore), caught late in his career, at the Royal Opera House, in 1981, was endearing. His performances, in recital, of Italian song were enchanting in their intimacy and delicacy of manner. Pieces such as Mascagni’s Serenata or Tosti’s L’Alba Separa Dalle Luce L’Ombra were the pure essence of Bergonzi, and he delighted in conveying his joy in singing them to his audiences.

His farewell recital at Covent Garden in 1992 was a memorable occasion, given exactly 30 years after his debut there. He was probably mistaken to continue to sing after that, and an attempt in 2000, at Carnegie Hall, at Otello proved something of a disaster. Yet he turned up later that year at the Festival Hall in London to receive a lifetime award from Gramophone and sang, at 75, a Neapolitan song with most of his voice intact.

Bergonzi recorded extensively. His lasting memorial will surely be his performance for Philips of all the tenor arias in Verdi’s operas. His sovereign Alvaro is preserved on an EMI set of La Forza del Destino, his Radames on Herbert von Karajan’s Decca set of Aida, his classic Rodolfo on a Decca Bohème, and his Cavaradossi on Callas’s second set of Tosca, for EMI. These, plus a legendary recital dating from 1958 for Decca, provide the essence of his great art.