The History of Plácido Domingo 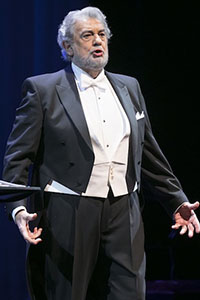 Born in Madrid in 1941 to parents who were zarzuela performers, Plácido Domingo was brought to Mexico at the age of eight. He attended Mexico City’s Conservatory of Music, where he initially studied piano and conducting, but when his vocal talent was discovered he began to take voice lessons as well.

At eighteen, he made his debut in a small role (Borsa in Rigoletto) at Mexico’s National Opera, and his first performance as a leading tenor (Alfredo in La Traviata) took place in the city of Monterrey when he was twenty. After having spent three seasons with the Israel National Opera in Tel Aviv, where he sang 280 performances of twelve different roles, he launched his major international career in 1965, and since then he has performed at all of the world’s most prestigious opera houses.

In 1993, Domingo founded Operalia, an annual international voice competition, which has helped to start the careers of many singers who have since become major figures on the world’s stages. He was also the prime mover behind Washington National Opera’s Domingo-Cafritz Young Artist program and Los Angeles Opera’s Domingo-Thornton Young Artist Program, both of which are designed to nurture and support the careers of opera’s future standard-bearers.

Domingo is also Artistic Advisor for the Youth Orchestra of the Americas.

Plácido Domingo has been awarded the Presidential Medal of Freedom in the United States as well as the titles of Commandant of the Legion of Honor in France, Honorary Knight of the British Empire, and both Grande Ufficiale and Cavaliere di Gran Croce of the Order of Merit of the Italian Republic. He has received honorary doctorates from Oxford University and New York University for his lifelong commitment and contribution to music and the arts. He has raised millions of dollars through benefit concerts to aid the victims of Mexico’s devastating 1985 earthquake, of the floods caused by Hurricane Paulina in Guerrero and Yucatán, also in Mexico and in El Salvador, and of the victims of Hurricane Katrina in New Orleans, where, in 2009, the stage of the Mahalia Jackson Theatre for the Performing Arts was named for him. In 2006, he conducted Verdi’s Requiem Mass in Warsaw, to commemorate the first anniversary of Pope John Paul II’s passing.

Although he has no intention of moving substantially into the baritone repertoire, during 2009-10 Domingo will be adding the title role of Verdi’s Simon Boccanegra – one of the greatest and most musically and emotionally demanding of all baritone parts – into his own repertoire, with performances at the Met, La Scala, Covent Garden, and Madrid’s Teatro Real.