The History of Georgi Nelepp 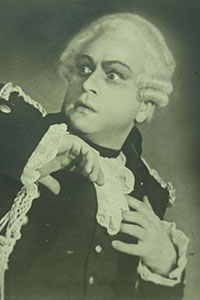 From 1930 to 1957, Georgii Nelepp performed dramatic tenor parts on the two most prestigious stages in Russia, the Kirov in St. Petersburg and the Bolshoi in Moscow. In Nelepp’s entry in The Great Soviet Encyclopedia, V. I. Zubarin writes, “One of the best Soviet opera singers, Nelepp was a highly skilled actor. He possessed a sonorous, soft voice capable of rich timbre. He was noted for the richness of his characterizations and for the austerity and nobility of his artistic form.”[1] In notes for a CD featuring four Bolshoi tenors, Charles Haynes calls Nelepp “the most exciting” of them, explaining that his “voice and artistry are entirely different from those of his three colleagues: the voice itself has a compelling ‘ring’ to it and there is a sense of urgency about his performances.”[2]

Nelepp’s life was marked by extremes. Against the odds, he ascended from farmhand to the heights of Russian celebrity. He did it by joining a revolution and competing to sing opera without any musical training.