The History of Alfred Piccaver 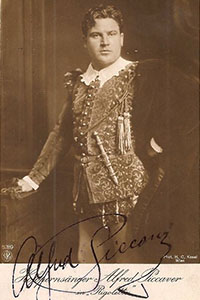 Alfred Piccaver was a British-American operatic tenor particularly noted for his performance as Rodolfo in Giacomo Puccini’s La Boheme.

Piccaver was born on 5 February 1884 in the Lincolnshire town of Long Sutton. Before he reached the age of two his parents emigrated to the United States of America and took out American citizenship.

Alfred was trained as an electrical engineer but he had a talent for singing and in 1905 he enrolled at the Metropolitan School of Opera where the school’s director Heinrich Conried recognised his considerable vocal ability and in 1907 sent the young Alfred to Prague where he studied with the famous teacher Ludmilla Prochazka-Neumann (1872-1954).

This led to a three year contract with the Deutsches Landes-Theater in Prague where he made his debut on 9 September 1907 in Otto Nicolai’s The Merry Wives of Windsor. In the following three years, he sang in operas by Flotow, Verdi, Wagner, Mozart, Puccini and Gounod. This variety stood him in good stead, because in 1910, he was invited to appear as a guest in Mattia Battistini’s touring company that was performing in Prague.
He must have impressed Battistini because Piccaver was persuaded to travel with the company to their next venue in Vienna where the Vienna Hofoper showed an interest in him. However, he continued to sing with the Prague company for the remainder of his contract and it was not until 6 September 1912 that he gave his first performance with the Vienna State Opera as a permanent member.

Piccaver had a warm, velvety, lyric tenor voice with a fine cantilena style and excellent legato and diction. Later on it became what an English critic has described as ‘slack muscled’ and acquired a baritonal quality, but in the early years he was known to the Viennese as ‘the Caruso from Prague’. His roles included Rodolfo, ( Puccini called him ‘my ideal Rodolfo’) Cavaradossi, Canio, Radames, Florestan, Lensky and Walther.

Piccaver loved Vienna and the Viennese way of life, so much so that when the director of the Metropolitan Opera in New York, Giulio Gatti-Casazza, made a lucrative offer for him to appear at the Met he turned it down. He was never asked again. In return, the Viennese were devoted to ‘Picci’, as he was affectionately known. When the First World War broke out Piccaver as an American citizen was unaffected, though when America joined the war in 1917 he was found trying to leave the country but was spared internment if he agreed to continue singing at the Opera. After the war his career at the Vienna State Opera was interrupted by appearances in Chicago in 1923, 1924 and 1925 and at Covent Garden in 1924.

In 1923, for reasons that are not clear, he claimed British nationality as he was entitled to do as a result of his place of birth, though Alfred Piccaver always considered himself an American. On 31 December 1931 his contract with The Vienna State Opera was terminated as a result of a dispute over his salary. He continued to live in Vienna and to make guest appearances in opera in Austria and abroad but with the political situation in Austria worsening he decided to return to Britain in 1937.
He made records and concert appearances in London and even appeared on the BBC’s fledgling television service in 1939. After the war he returned to Vienna for the re-opening of the Vienna State Opera House in 1955 and decided to stay.

He died in his favourite city on 23 September 1958. The Austrian government gave him a state funeral.