The History of Dino Borgioli 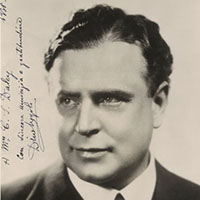 Dino Borgioli studied with Eugenio Giachetti in Florence, and made his operatic debut in 1914, as Arturo in I puritani, at the Teatro Corso in Milan.

He then sang the role of Fernand in La Favorite at the Teatro Dal Verme, before making his La Scala debut in 1918 as Ernesto in Don Pasquale.

On the international scene, Borgioli made his debut at the Royal Opera House in London, as Edgardo in Lucia di Lammermoor, opposite Toti dal Monte in 1925, and at the Glyndebourne Festival where he sang as Ottavio in Don Giovanni, and as Ernesto. He also appeared in Paris, at both the Opéra-Comique and the Palais Garnier, as Almaviva in Il barbiere di Siviglia, Ramiro in La Cenerentola, Il Duci in Rigoletto, Ottavio, Edgardo and des Grieux in Manon.

The role of Cavaradossi in Tosca was his debut role for both the San Francisco Opera in 1932, and the Lyric Opera of Chicago in 1933. He made his debut at the Metropolitan Opera in New York City on December 31, 1934, as Rodolfo in La bohème. Borgioli appeared there for one season only: his other roles were Ottavio and des Grieux (Massenet). He also toured Australia, where he received praise for his tasteful singing and musicianship.

Borgioli made a number of gramophone records which confirm the attractiveness of his lyric voice and the elegance of his phrasing. These qualities can be discerned in two famous complete recordings of Il barbiere di Siviglia and Rigoletto which he made in 1928, opposite the baritone Riccardo Stracciari. Nonetheless, he was still overshadowed in the theatre and on disc by another stylish tenore di grazia of his era in Tito Schipa.

In 1949, Borgioli became director of vocal studies at the New Opera Company of London, where he directed stage productions of Il barbiere di Siviglia and La bohème. He died in Florence, aged 69.