The History of Alain Vanzo 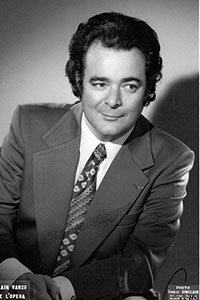 Vanzo was born in Monte Carlo, Monaco, the son of a Mexican father and a French mother. He started singing at a young age in the church choir. At 18, he started singing popular songs with a small band called “La Bastringue”. He sang at the Théâtre du Châtelet, during the 1951–52 season, as a double for Luis Mariano in the operetta Le Chanteur de Mexico, while taking voice lessons with Rolande Darcoeur in Paris. His breakthrough came in 1954, when he participated in a singing contest at Cannes, and won the first prize.

Vanzo was then immediately invited to sing at the Opéra-Comique and at the Palais Garnier, quickly establishing himself in the standard French lyric repertory in roles such as Nadir in Les pêcheurs de perles, Gérald in Lakmé, Faust, Roméo in Roméo et Juliette, Vincent in Mireille, des Grieux in Manon, etc. He also sang the Italian repertory as the Duke in Rigoletto, Alfredo in La Traviata, Rodolfo in La bohème. He won great acclaim at the Palais Garnier in 1960, as Edgardo in Lucia di Lammermoor, opposite Joan Sutherland who was making her debut there. This was the beginning of his international career, appearing at many of the major opera houses in Europe, the Royal Opera House in London, La Monnaie in Brussels, the Liceu in Barcelona, the Vienna State Opera, etc. Vanzo also appeared in North America, on tour with the Paris Opera, singing Faust, and in South America at the Teatro Colón in Les contes d’Hoffmann. He sang at Carnegie Hall in New York, as Gennaro, in the famous 1965 concert version of Lucrezia Borgia, opposite Montserrat Caballé.

As the years went by, Vanzo extended his repertory to more dramatic roles, such as Arrigo in the original French version of I Vespri Siciliani, Adorno in Simon Boccanegra, Cavaradossi in Tosca, Robert in Robert le Diable, Raoul in Les Huguenots, Mylio in Le roi d’Ys, and became internationally renowned as one of the best exponents of the role of Benvenuto Cellini and Werther.

Vanzo never officially retired, singing well into his sixties, mostly in recital, and appearing frequently on French television. He left relatively few commercial recordings, the most famous being Lakmé, opposite Joan Sutherland, and conducted by Richard Bonynge.

Alain Vanzo died in Paris on January 27, 2002 of complications following a stroke. He was 73.