The History of Giacomo Aragall 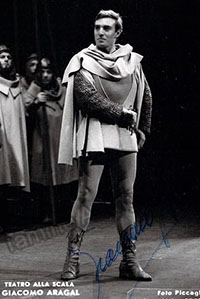 Despite debilitating stage nerves and a tendency to sing under pitch, Spanish tenor Giacomo (born Jaime or, in Catalan, Jaume) Aragall forged a significant career. (He sometimes used an Italian form of his last name, Aragali, as well.) While his gifts were not always realized to their fullest due to the persistent anxiety that dogged him, his lovely, slightly smoky timbre and easy top register were heard to excellent effect in the lyric roles of his young years and in the spinto parts he assumed in his maturity.

Aragall’s first serious studies were with Jaime Francisco Puig in Barcelona. In view of Aragall’s poor circumstances, professor Puig had accepted him without fee. When five years had passed (including military service), Aragall traveled to Milan to study with Vladimiro Badiali. Within six months, the young tenor had won the Voci Verdi Competition. Such was his promise that in the same year as his stage debut (Venice, 1963 in Verdi’s Jérusalem), he appeared at La Scala as the eponymous hero in Mascagni’s L’amico Fritz.

His La Scala debut led to the offer of a three-year contract, an occurrence that placed enormous psychological pressures on the 23-year-old tenor, introverted by nature and as yet unaccustomed to living up to high expectations. For several important debuts, Aragall was presented as the Duke of Mantua, Rigoletto serving as his first opera at Verona in 1965, at both Covent Garden and the Metropolitan Opera in 1968, and in San Francisco in 1973. The year following his San Francisco debut found him back in the California city for Massenet’s rarely heard Esclarmonde, a production starring Joan Sutherland transported to the Metropolitan in 1976.

A Decca/London recording preserved the work of most of the original production’s cast, including Aragall as Roland. In the late ’70s, nerves and distress at being apart from his family led Aragall to abandon his career for a time. Eventually, however, the desire to sing drew him back to the stage, more mature in handling career stresses and able to master a somewhat heavier repertory. Roles such as Cavaradossi, Rodolfo, Gabriele Adorno (Simon Boccanegra), Don Carlo, and Riccardo became staples along with certain French parts from earlier days, Werther, Faust, and Massenet’s Des Grieux included.