The History of Sydney Rayner 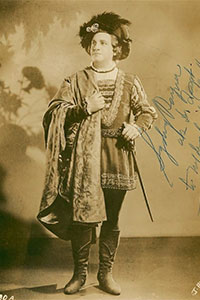 Born in New Orleans, Rayner went to Milan in 1924 for vocal studies, which led to his debut in 1927, in Rome, as Rodolfo in La bohème. He was often heard at the Opéra-Comique and the Berlin Staatsoper.

On May 23, 1936, the tenor made his Metropolitan Opera debut, as Don José in Carmen, opposite Bruna Castagna. He appeared with that company through 1938, in Aïda (with Elisabeth Rethberg), Cavalleria rusticana (with Rosa Ponselle), Carmen again (opposite Ponselle), Les contes d’Hoffmann (conducted by Maurice Abravanel and directed by Herbert Graf), Manon (with Bidu Sayão in her Met debut, later with Grace Moore), Faust, and Pagliacci (opposite Robert Weede in his Met debut).

In 1943, Rayner sang in La forza del destino, opposite Herva Nelli, at the Brooklyn Academy of Music.

Rayner died at the age of eighty-six, in East Patchogue.