The History of Dmitri Smirnov 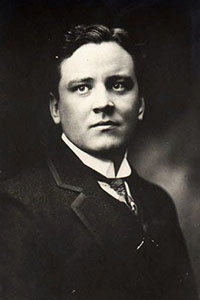 Narration 1
The sleeve notes of a record issued by the Rubini Company of our next singer begins thus:
Where in the hierarchy of the great operatic tenors should we place the Russian Dmitri Smirnov. For most record collecting devotees of singers golden age, the answer must seem fairly plain. His name tends to be linked with that of Leonard Sobinov, if a little below it, for Sobinov was for decades acknowledged king of tenors in Russia, where his reign was as little disputed as that of Caruso in the western world.
The youngest Smirnov never dethroned him, but the oldest singing activities were largely confined to his homeland. Smirnov on the other hand, achieved fame in other parts of Europe and also in America.
In consequences, records had a considerable circulation in the West and they’ve always been highly prized by collectors. Though a referendum would probably hand the palm among Russian tenors with Sobinov, there are plenty of us who prefer Smirnov. In my experience, this preference is commonly found amongst those who sing themselves.
Either at a professional, or a good amateur level, and particularly among those where musically rather than merely vocally accomplished. It isn’t difficult to divine reasons for this. Smirnov’s phrasing was more graceful, more plastic, more organic.

His tonal shadings and gramophone terms of least, were more varied and more artfully deployed. Sobinov’s voice was warmer, smoother, generally more opulent. But his recorded performances were seldom as musically convincing as Smirnov’s.
As far as interpretation is concerned, I must admit, as would most collectors, to a lack of knowledge of the Russian language. And since treatment of words is an important aspect of the singer’s art, this leaves a question mark beside that aspect of my judgement.

He was born in Moscow on the 7th of November 1882. And as a boy, and a young man, his ambition, was to become a skater. However, his fine voice soon attracted attention and by 1903, he was singing with a Russian company of the Hermitage in Saint Petersburg.
He entered a competition sponsored by the Bolshoi theatre and secured a two-year contract with the imperial opera. His official debut at the Bolshoi was in the autumn of 1904 in Ruslan and Ludniva. The same performance, by the way, had introduced Rachmaninov as a conductor. Smirnov remained at the imperial opera for many years, and in addition to all the usual Russian operas, such as Eugene Onegin, Prince Igor, Sadko, the Demon, May Night etc he also sang in Traviata, the Magic Flute, Lakme, Faust, Rigoletto, Halka, and the Pearl Fishers there.
The final seal on his success in his own country, was his appearance at the Mariinsky theatre in Saint Petersburg in Eugene Onegin and Rigoletto in 1907.

Here he is then, in Eugene Onegin faint Echo of my youth.

Narration 2
He sang in many other important centres and in particular, in Monte Carlo, where he was a great favourite, singing there each season from 1908 to 1913.
He was engaged for the Metropolitan from 1910 season and made his debut there in Rigoletto but with Kofskio and Omatto. Other leading ladies that season included Alice Neilson, Tetrazzini, Farrar, and Alma Gluck.

The record sleeve note continues the story: In the western world, his success seems to have been more equivocal. It was most pronounced perhaps at Paris and Monte Carlo. In his few performances at London’s Covent Garden, he was well liked, without exactly setting the Thames on fire.
He was favorably received at the Cologne at Buenos Aires, but his North American appearances in New York and Boston, did little to enhance his reputation. Possibly because his voice had neither uncommon power, nor exceptional sweetness. One critic referred slatingly, to his pallid vocalism. Another pronounced him dead, flat, colourless, and found fault with his high notes.

His contract at the New York, Metropolitan was cancelled after a few performances by mutual consent. An eloquent pointer to audiences’ reaction. He was soon back in Europe finding consolation in the conquest of fresh capitals Berlin, Vienna, Athens, but it must have been a sad and surprising experience for such a highly gifted singer, his record were destined to be among the more satisfying ever in size. And just to prove that statement.

Here is his early but wonderful record of Se Il Mio Nome from Rossini’s opera, The Barber of Seville.

Narration 3
Smirnov left America in 1912. Disappointed that he had not been allowed to star in any of his famous Russian roles there. He returned only once, in 1926 for a concert tour.
Back in Europe, he was with Chaliapin, in Boris Godunov in Paris in 1908. Under the theatre, du Chatelain in 1909.
He also appeared at the opera, Comique in La Boehme, but that was not until 1924.
He sang at the Monet, in Brussels, during seasons 1909 1910, and 1923-1924, In 1914 he sang Levko in May Night, at the Beecham opera, in Jury Lane in London.

Here is what the audience would hear during these performances

Narration 4
We are fortunate, that such a discerning critic of Sergei Larvik, wrote of him in his book. We remember his comment from Anselmi. Now let us hear what he had to say about Smirnov.
In the summer of 1909, I became closely acquainted with another outstanding tenor, Dmitri Smirnov. Outstanding not so much for his talents, as for his outward success.

He was as if nature had endowed this man with everything necessary to put him on a par with Ersa and Sobinov, at one time his outward success, I emphasize outward, enabled him almost to draw level with Sobinov and considerably overtake Ershaw. Nevertheless, he did not attain the status of a phenomenon, in the history of music.

Smirnov possessed a strong lyric tenor of wet compass, a trifle harsh, but of good tambra, having made an excellent job of the part of Rodolfo in La Boehme, he began to over rate his vocal potential and even contrived to sing Raul in Les Huguenots. But this feat, won him no laurels, his performance being reaped dramatically as often happens, when the voice is strained.

Smirnov’s voice was beautifully produced and paradoxically, though it may seem, this very circumstance was harmful to the singer. Not being gifted with a sufficiently sensitive artistic intellect, he used, first and foremost, to pick out in each role his superficial aspects. In the parts of Romeo, the Duke, and Nadir in the Pearl Fishers, he cleverly identified and demonstrated their Italian elements, but he also introduced the same dramatic devices in the parts of Vladimir Dombrovskis, Vladimir Igoravitch, and Vansiga and Lenski.

His temperament was shallow, one might say, superficial. His intuition was not notable for his delicacy. He never himself experienced sincere emotion and he did not arouse it in the listener.
Relying excessively on long formatti, diminuende and melismatta, it did not penetrate to the essence of the role but drifted on its surface, this was particularly evident in his portrayal of Vladimir Igoravitch and the Prince in La Salkra.
In addition to a good voice and the ability to make excellent use of it, Smirnov indeed possessed a fine appearance and excellent diction. Tall, slender, and well built, his manner of speech was elegant and cultivated. One strange quality of his voice, however, struck the keen ear.
A minimal but persistent trommolo, scarcely noticeable on short notes, on extended notes it consistently marked his singing.
So that is Lervick’s opinion of Smirnov then, and very interesting it is.

For my own part, I must say that I’ve always found a slight vibrato, extremely attractive in a tenor voice, and it often helps to create that feeling of sadness and vulnerability, that John Stein mentioned earlier when discussing Lubinsky. And it certainly makes the voice very individual, as we can hear when we listened to de Lucia, Bonci, Hertalle and Lauri Vopi, all of whom have inherent vibratos.

Let’s hear him in a famous record of his, from a rare Musoffski opera, Sorotschinsky Fair

Narration 5
Appearances in Berlin, Frankfurt, and Cologne and in Madrid, Milan and Rome, have also been traced. And in 1928 he played the part of Peter the Great in a silent film, strange how many opera singers made silent films.
Smirnovs appearances in Europe continued into the 1930’s, although, by then, he was devoting much of his time to teaching.

He was heard in BBC broadcast from England as late as 1937. At the time of the Revolution in Russia, he had no permanent home. Although he was offered many inducements to live again in his native land, he declined them.
He took up residence in Latvia and died in Riga on April 27, 1944.
For HMV he made 82 acoustic and two electric sides and for Odeon, six electricals.

To finish, here is an electric Odeon of the Song of India from Rimsky Korsakov’s opera Sadko