The History of Vasili Damaev 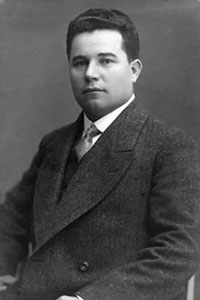 Narration 1
Like so many of the great Russian opera stars, Vasili Damaev, our next subject, sang as a youth in a church choir.
After leaving school he became a shepherd, in his late teens he came to Moscow, where he sang a number of times with the Moscow Philharmonic.
He had no ambition at this stage, to become a singer. His main interests were dancing and fencing.

In 1905 he was asked to make a number of recordings for the Lyra phone company, the impresario, Serbes Zimmen Herbai. He approached Damaev and offered him a contract to sing at his newly opened opera house at the Tongroide no dome. Damaev had no formal vocal tuition and absolutely no stage experience, but he had a fine voice and Zimmen sensed, that with careful grooming, his new recruit could become a first-class tenor.
So, he passed him on to his baritone, Pie O’Lenin, who along with the theatre’s director, Emuellid Cooper taught Damaev the rudiments of stagecraft, and formed from the raw material, a fine very vospintio tenor.

After two years study Damaev made his debut. Lerwick, the baritone and critic, who’s already been mentioned, mentions Damaev in his book. His was a fine natural voice, which with careful study would have developed into a fine lyric tenor. One wonders just how much Zimmern was involved in Damaev vocal training, or at least what orders he had given O’Lenin, because what emerged was not a lyric tenor, but Amerigo spinto, capable of singing lyric roles and eventually developing a deeper more heroic quality.

Now Russian opera, strange to relate, has no heroic tenor roles akin to Radimez or Otello. When opera is requiring a heroic tenor over mounted, in Russia, guest artists were usually called in.
Frigma and Hershaw both sang heroic roles, were really lyric tenors whose voices darkened with time. And neither was typical of the normal Russian tenor.
Zimmern’s opera was renowned for presenting novelties, new Italian operas and vials of Russian operas which had lapsed from the repertoire.
The impresario accordingly moulded Damaev into a tenor, adapted to his future plans, which necessitated the availability of a voice, capable of singing the more terlike roles. Damaev remained with the Zimmern strip until 1930, when he retired from the stage, but this period, Damaev remained the leading tenor.

There were several important landmarks in his career. In 1909, Zimen mounted a new production of Wagner’s opera the Master Singers with Damieve and Vaulta. At the theatre Chatelains in Paris in 1909, Damaev appeared with the Russian company which included Chaliapin, Rakowski, Kitowski and Petrenko.
The most important event however was in 1900, when he presented the world premiere of Rimsky-Korsakov Rimcovoskia opera, the Golden Cockerel, with Damaev in the leading tenor role.

In 1914 he also wanted Verde Vitello with Damaev in the main part, Driviakina as De Demure and Bokarov as Eyago. Davaes roles were not too numerous, that he appeared in Ivan Susanin, Askold’s Tomb, the Queen of spades, Mazeppa, Sadko, May Knight, the maid of Pskov, Carmen, Otello, Aida, the mastersingers, Boris Godunov and the Golden Cockerel.

His records leave one in no doubt of his values in such roles, particularly the more forceful ones.
He had perhaps, little of the lyrical charm, the stylistic refinement of such classic Russian tenors as Sobinov, Smirnov, Kowalski or Leninche. But the brightness, the clarity and power of the voice are evident and similarly unmistakable as the basic virtue of style, admirably forthright and direct.

Here he is in an aria from Rimsky Korsakov’s May Night, Sleep My Beauty.

Narration 2
Many of the items we have heard in this survey, have come from records issued by Rubini, a small private company run by the indefatigable Sid Gray. To whom collectors owe a considerable debt of gratitude.
In addition to albums of the most famous singers, Sid Gray has issued many items of lesser-known artists, whose original records are almost impossible to come by, in particular, Russian and French singers.
The present and damiest items being just such examples. I suppose in some way I helped a little to get Sid going, but it was he who bought all my 78 rpm records, as a basic collection when he started up full-time.
I shall never forget his visits to my house. He came by bus, from out near Glasgow Airport.

Several changes were involved, but undeterred, he carried away the records in two old suitcases on each visit. When I visited his home, he used it to entertain me with records and cylinders of singers that I had never heard of up til then. And he would play them on original machines.
He is for example, a recognised world authority on Edison records, and to hear examples played on an original Edison was something I shall never forget.

He moved down South to Sussex, many years ago, and started his now famous Rubini company. I’m afraid that his issues are few and far between nowadays, he thinks that the days of the LP record are numbered because of the advent of compact discs, and the record companies’ determination to promote these at all costs.
This is true, I myself, this very month, stopped my standing order for the gramophone magazine, which I have purchased non-stop for over 40 years. Because almost every issue discussed, is now of compact discs.

In any event, Sid Gray will remain the most unforgettable character I have ever met, and those wonderful Rubini records, are sure to become rare and valuable someday. Grab them, if you can.

To finish, an aria from Rubinstein’s opera Nero, and to hear a little of Damaev in a non-Russian role, part of a duet from Sandford’s opera Samson and Delilah, that she sings with Petrova Zansibar.