The History of Leo Slezak 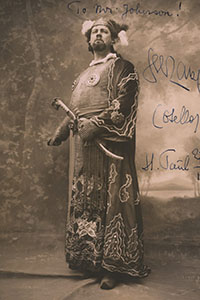 Narration 1
Up till then, we have heard singer after singer from Italy, France, Russia, and Spain. Does it not seem strange, that no British, German or American tenor has yet appeared?
Well perhaps not so strange after all, if you know your history and musical history. We can hardly expect an American at this stage. Remember we are discussing tenors born in the 1870s. And a young American boy in the 1880s would be much more interested in the exploits of Wyatt Earp and Doc Holiday, facing up to the Daltans at the O.K. Corral in 1882, than Tomanio’s or Doresces outpourings in far off Europe.

Indeed, we can be fairly certain that he would never have heard of them, nor Rubini or Mario for that matter. The English singers were more interested in oratorio, which enjoyed an enormous vogue in those days.
Thousands used to turn up year after year at the great musical festivals, held all over the country. And the first two great English tenors, John Braham and Sims Reeves, were essentially oratorio singers.
My own grandfather Kairton Bell, who was an amateur singer himself, and who had heard Reeves, much preferred oratorio to opera. And a good Victorian ballad was preferred to an aria by Verdi or Puccini.

German opera was another matter altogether. Started by Gluke and continued by Handel, Mozart and Viber and culminating in Wagner, it had began by supplying the great constratio with their material.
Guadagni had been the first orthro and many of Handel’s finest arias, had been written especially for the great male metro soprano Senesino. Later, many outstanding female singers had made their reputations in German opera. Tenors, very few.
Anton Raff had been a favourite of Mozart’s, In Dominao was written for him. While Wagner had great problems trying to find voices large enough to be heard over his huge orchestras. His great tenor find, was Josef Tikacheq, 1807 to 1886.
It was to be his first Rienzi, his first Tannhauser and also a very famous Lohengrin. To be followed by Ludivig Scholler, his first Tristan, but unfortunately died of a stroke aged 29.

Doresce came along at the end of the last century and in addition Max Alverae, Ernest van Dijk and Herman Winkelman had great success in the Wagner roles at this time.

But the first really important German tenor, to leave us with a large output of gramophone records, (375 published titles) was the Moravian tenor Leo Slezak, and he was never merely a vignarian specialist.
He was born on August 18th, 1873, and after a few appearances in Breslau, he was launched, ‘willy nilly’, on an international career when the company appeared at Covent Garden in 1900. And what an unusual experience at his debut. Right in the middle of his Lohengrin, the show was stopped, and the relief of Mafeking was announced to wild cheering and celebrations from the audience. Poor Leo hardly knew what it was all about.
Jon Deresce was also appearing that season, so it gave him a rare opportunity to study Deresces method. He was very impressed and decided to use this method rather than the Sprecht resang method, popular at Berout.
He sang at Windsor before Queen Victoria with Melba, whom he described as already ageing. His success led him to Vienna, where he joined one of the most illustrious operatic regimes of all time.

The Vienna state opera, then under the direction of Gustav Mahler. Mahler of course, is known to us today as one of the great symphonic composers. But during the early years of the century, his fame rested as conductor and director of the Vienna state opera. Where he had assembled an outstanding group of singers, including the tenors Vincamine and Schmeidis, the sopranos Von Milden burg, Eliza, Luciviette, and Zelma Kurtz.
The baritones Demute and Vidaman and the bass Heche. All performing to the very highest artistical standards and established as a regular company.

Another duo was to be added by the introduction of Slezak. Vienna became and remained his spiritual home and he was to remain there until 1926. He made his debut in 1901 as Arnold in William Tell and by 1907, was the leading tenor of the company.

To begin with then, let’s hear Slezak in a favourite opera from his early Vienna period.
The Queen of Sheba by Goldmark

Narration 2
One would think, that having reached the top, he would now be content to sit back and reap the rich rewards on offer. Not for Leo. He obtained several months leave and went to live with Jean Deresce in Paris and studied his non-German roles all over again in original languages, with a view to a real international career.
Studies complete, he reappeared at Covent Garden as Otello in 1909. Following this up with his Metropolitan Opera debut the same year. His Otello there, with Francis Alda, was rapturously received and he was to appear there regularly until 1913. Mention must also be made of his series of magnificent performances given at the Boston opera house, during his years in America.
He was extremely popular there and received rave notices after each appearance in the city. Slezak was a great Otello, usually placed after Tamagno and ZenaTello as his greatest protagonist, although Paoli, Zanelli, Martinelli and no doubt Domingo also have that claimant.

Here are some scarce Odeon records then, from this, his Metropolitan Opera debut made in 1912, during his period in America and sung in Italian, you’ll notice.

Narration 3
His home ground, being in central Europe, Slezak’s international career did not follow the usual pattern of traveling to and fro across the Atlantic. He spent much of his time touring the capitals of the Balkan States and only just managed to get out of Russia at the outbreak of the First World War.
He sang in all the Scandinavian leading houses before the Kaiser and Kings and like Paoli was a calmer singer to five courts. Unfortunately, the end of the war left Austrian currency quite valueless and forced Slezak to travel again in order to earn some real money.
We find him even trying the variety stage in Dresdin, singing Lidar. Times were exceptionally hard in Germany and Austria after the First World War, so bad, that it was to be the Nazi state that rose from the ashes. His official farewell was on the 26th of September 1933 at his beloved Vienna opera as Pagliacci, ten performances in all. He was in great form and left the stage with the sound of tumultuous applause ringing in his ears.

Here he is in an aria from a rare opera by Flotow, same man who wrote Ma Paris.
Alessandro Stradella, Jungfrau Maria.

Narration 3
Now aged 60 and retired to his beloved house at Egurin on the Taegrin Sea, that should have been that. But Slezak had been in a couple of films earlier in his career, as an actor not as a singer, and had been quite successful.
By 1938 his film engagements were so great, that he had to move to Berlin. And it was only in 1943 that he made his last film, so that for 11 years, he had had a second career with the majority of his public, blissfully ignorant, that he had been Germany’s greatest Tenor.

He had also four books published in Germany, and which were quite successful. It is sad to relate therefore, that this wonderful and industrious artist had a miserable time in his declining last years. His daughter was in Berlin all during the air raids on the city and everyday there was an anxious phone call from her father. His son Walter, was an American citizen, and by the way, a well-known film actor and was completely out of contact.
His beloved wife Elsa died in 1944 and he spent much of his time, cold, and hungry waiting to join her.