The History of Luigi Alva 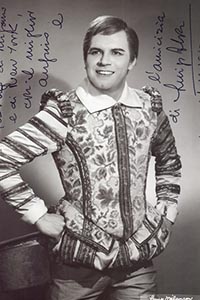 Luigi Alva was born in Paita, Peru, and served for a while in the Peruvian Navy before concentrating on a singing career. He studied at the Conservatorio Nacional de Música in Lima under Rosa Mercedes Ayarza de Morales and made his operatic debut in Federico Moreno Torroba’s Luisa Fernanda in Lima in 1949. Alva went to Milan in 1953 and studied under Emilio Ghirardini and Ettore Campogalliani. He made his European debut at the Teatro Nuovo in Milan as Alfredo in Verdi’s La traviata in 1954, following that as Paolino in Cimarosa’s Il matrimonio segreto. His debut at the La Scala came in 1956 as Count Almaviva in Rossini’s The Barber of Seville, a role in which he became widely admired.Subsequently he sang with most of the leading opera festivals and companies in the US and Europe. At Glyndebourne he made his debut as Nemorino in Donizetti’s L’elisir d’amore.In 1962 Alva made his debut with the Philadelphia Lyric Opera Company as Count Almaviva and in 1964 he made his first appearance at the Metropolitan Opera as Fenton in Verdi’s Falstaff. He went on to sing in a further 101 performances at the Met between 1964 and 1975.

Alva had a light lyric tenor voice and was known for the clarity of his diction and his elegant phrasing, a quality which George Jellinek described as compensating for an “underpowered” voice in the 1956 live recording of Così fan tutte from La Scala.[6] He rarely ventured beyond his favourite repertoire, which included Mozart, Rossini, and Donizetti and to which (according to Harold Rosenthal) his “elegant, refined style” was particularly suited. In 1980 he founded the Asociación Prolírica del Perú in Lima and served as its artistic director for several years. He retired from the stage in 1989, but sponsors the Premio Luigi Alva for young singers, gives master classes, and serves as a juror in singing competitions. Alva also teaches singing at La Scuola di Canto (Voice Academy) at La Scala in Milan. Amongst his students there was the Belgian tenor Marc Laho.