The History of Richard Tucker 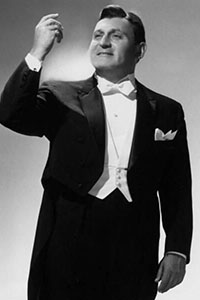 Richard Tucker was born Rubin Ticker, in New York City, on August 28th 1913. He was brought up in a religious family and sang as an alto in the choir of the famous Chazan, Samuel Weisser. As he grew up, he took Chazanut lessons with Weisser, and later with the celebrated composer Zavel Zilberts.

Tucker met Sara Perelmuth, the sister of the equally famous Opera Singer/Chazan Jan Peerce (although the two never became close), and when he married her in 1936, he was a part-time Chazan at the weekends, in New Jersey and a fur salesman during the week.

Although he seems to have used the name Tucker from a very early age, it wasn’t until 1937 that he changed his first name to Richard. But even so, his family continued to call him Ruby throughout his life.

He managed to get some engagements singing secular songs on a radio programme in Manhattan and, even though, in 1938 he took a full-time post as Chazan in New York City, he started to set his sights on singing in opera.

In 1942 he auditioned for the Metropolitan Opera House, but was not taken on, so in 1943 he accepted an exceedingly prestigious post as Chazan at the Brooklyn Jewish Centre, working closely with its famous music director, Sholom Secunda. Secunda wrote a number of compositions for Tucker, some of which have become very well-known.

Tucker continued singing on the radio, as a result of which he was finally ‘discovered’ by the Met. and was engaged to sing in La Gioconda in 1945.

As keen as Tucker was to sing on the stage, he was also deeply attached to the Bimah, and he must have been very disappointed when pressure was put on him to give up his position at the Brooklyn Jewish Centre. Even so, throughout the rest of his career he frequently conducted services in many synagogues around the world.

Its is said that one of his greatest experiences was when he conducted a Shabbat morning service in the old Synagogue in Vienna, where Salomon Sulzer had been Cantor. This was only a few years after the end of the war and Tucker was deeply moved by the environment, and the occasion.

Richard Tucker saw singing opera and cantorial music as very similar arts. He once said ‘They both demand blood and guts.’

He made many Cantorial recordings, and it’s reported that Elvis Presley used to like listening to them. (Perhaps there are some Presley afficianods who can detect some influences of Tucker in Presley’s singing!)

His wife accompanied him to every operatic performance he gave and would always wait in the wings, and accompany him back to his dressing room.

When he died, a funeral service was held for him on the stage of the Metropolitan Opera House. The service ended with the stage bare, except for Tucker’s coffin, as the curtain came down on him for the final time.