The History of Ivan Kozlovsky 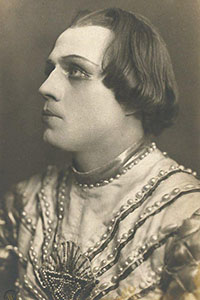 Ivan Kozlovsky made his operatic debut at Poltava in 1918 (or 1920) as Faust, then moved to the Kharkov opera in 1924 and Sverdlovsk in 1925. He joined the Moscow Bolshoi Theatre in 1926 and was one of the leading tenors until 1954, then appeared occasionally until 1970 (role of the Innocent in Boris and farewell concert). In an unusually long career, he appeared still frequently in public 1972-1976 and sings on July 4, 1985 for the Reizen’s 90th birthday at the Moscow Bolshoi.

Singer mastering a rare technique Ivan Kozlovsky was famous as Lensky (Onegin), Berendey (Snegurochka – the Snow Maiden), Levko (May Night), Vladimir (Prince Igor), Nero by Rubinstein, Doubrovsky by Napravnik, The Indian Guest (Sadko) etc. He also encouraged contemporary works and was outstanding in the western repertoire: Faust (Charles Gounod), Werther, Rigoletto, Barber of Seville, Lohengrin, Orfeo, Traviata, Bohème, etc. He was renowned for his high register and his rich palette of shadings. Apart from operatic performances, he gave many recitals in all Russia in programs of the classical repertoire (Lieder of Schubert, Schumann, and Liszt) as well as Russian and Ukrainian songs.

Ivan Kozlovsky taught at the Moscow conservatory from 1956 to 1980. An artist of imaginative power, he expanded his activities into stage direction, striving to synthesise dramatic action with its musical realisation. With his own company, 1938-1941, he staged Werther, Orfeo (Gluck), and Katerina of Arkas, which he directed.