The History of Torsten Ralf 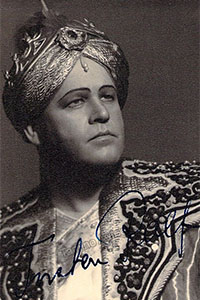 Ralf began his vocal studies in Stockholm with Haldis Ingebjart and John Forsell, and later in Berlin with Hertha Dehmlow. He made his debut in 1930, as Cavaradossi in Stettin. After singing in Chemnitz (1931-33) and Frankfurt (1933-35), he joined the Staatsoper Dresden in 1935. He also appeared regularly at the Munich State Opera and the Vienna State Opera, establishing himself in roles such as Florestan, Tannhäuser, Lohengrin, Stolzing, Siegmund, Tristan, Parsifal, Bacchus, but also Radames, Otello.

He created Apollo in Strauss’s Daphne in 1938, and Heinrich Sutermeister’s Die Zauberinsel in 1942.

Ralf made guest appearances at the Royal Opera House in London, the Teatro Colón in Buenos Aires. During the war, Ralf sang with the Berlin State Opera and the Stockholm Opera. He made his debut at the New York Metropolitan Opera in 1945, as Lohengrin under the baton of Fritz Busch, he sang at the Met for three seasons.

In 1952 he received the title of Court Opera Singer in Sweden. Ralf died unexpectedly in 1954, but his voice lives on in several recordings he made, notably his excerpts of Lohengrin with Tiana Lemnitz as Elsa, Tristan with Helen Traubel as Isolde, as well as scenes from Die Frau ohne Schatten with Hilde Konetzni.