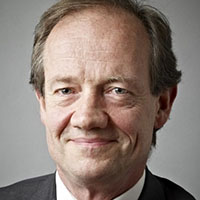 Chief Music Critic of the Sunday Times for a quarter of a century, without any formal musical training, Desmond Shawe- Taylor belonged to a generation of hard-working and inspired amateurs who learnt their trade as they went along.

Educated at Shrewsbury and Oriel College, Oxford, where he read English, Shawe-Taylor served throughout the Second World War in the Royal Artillery, and on demobilisation he was taken on as music critic by the New Statesman, at the age of 32.

There he remained for 13 years, as one of a galaxy of robust writers who between them turned the New Statesman into compulsory reading for people of all political persuasions. And it was to the arts pages that readers generally turned first for Shawe-Taylor’s contemporaries as contributors included V.S. Pritchett, Desmond MacCarthy, Raymond Mortimer and Edward Sackville-West.

Shawe-Taylor and Eddy Sackville-West met in 1935, Shawe-Taylor staying a night in Sackville-West’s rooms at Knole, in Kent, before they both attended a performance of Berlioz’s opera The Trojans, at that time such a novelty in Britain that they thought it well worth a journey to Glasgow to hear it. A firm, if sometimes bumpy, but very creative, friendship formed that was to last until Sackville-West’s death in 1965.

Immediately the war was over, Shawe-Taylor and Sackville-West’s Oxford undergraduate friend Eardley Knollys alighted on Long Crichel House, near Wimborne, and the three of them bought it as a weekend retreat. They were later joined by a fourth partner, Raymond Mortimer, literary editor of the New Statesman, and at Long Crichel established a kind of male literary salon.

As both Shawe-Taylor and Sackville-West were early devotees of the gramophone, entertainment consisted of music, conversation and croquet, which Shawe- Taylor listed in Who’s Who as one of his recreations. The ambience was one of informal comfort enjoyed with excellent food and plenty of wine.

Fortunately, two outstanding diarists, James Lees-Milne and Frances Partridge, were regular visitors to Long Crichel, and they have left indelible impressions of the sometimes rowdy, always stimulating, atmosphere. “Eardley, Desmond and Eddy lead a highly civilised life,” Lees-Milne noted in 1947. “Comfortable house, pretty things, good food.” He thought Shawe-Taylor “the gayest, sweetest tempered, most informative person in the wide world”. Many years later, Lees-Milne recalled in conversation that life at Long Crichel had been “just hilarity from beginning to end. Unlike Garsington, it was quite unselfconscious. You were left alone. There was nothing organised. And there was never any nonsense about tete-a- tete conversations. Everyone joined in.”

The quartet who entertained so generously at Long Crichel could be quarrelsome but they were all essentially civilised and rounded personalities, who contrived to create a home that Ben Nicolson thought “almost too good to be true”. Writing to Sackville-West to thank him for a visit in 1949, he said, “I think the serene living you have achieved is miraculous.” What Shawe-Taylor contributed in particular, according to the diaries of Frances Partridge, was “boundless high spirits, optimism, volatility, and interest in everything that comes his way”.

A good deal of serious work was undertaken at Long Crichel. In 1948 Shawe- Taylor published Covent Garden, a history of the Royal Opera House, and then he and Sackville-West got down to their great collaboration, published in 1951 as The Record Guide. “It became absolutely awful,” Shawe-Taylor confided to me during a visit I made to Long Crichel to research a biography of Sackville-West. “We decided that unless the Guide was going to kill us we had better kill it . . . It was the most awful sweat.”

It was also in the end a tour de force, with Shawe-Taylor concentrating on a critique of gramophone records of opera and song. The overall result was the kind of guide you could take to bed and read as a novel, and although obviously many details relating to the records themselves are obsolete, Shawe- Taylor’s and Sackville-West’s succinct comments on various composers are written with a aplomb and striking vividness, amounting to miracles of compression, information and entertainment. It was intended as a selective, not a comprehensive, guide, and it is the stamp of personal preference that gives the work its special flavour.

In 1965 Shawe-Taylor’s contribution to musical criticism was recognised by his appointment as a Commander of the Order of the British Empire. From 1973 to 1974 he was guest music critic on the New Yorker, and for many years after retiring as Chief Music Critic (in 1983) he continued to contribute articles to the Sunday Times. Even before the onset, in 1993, of his Alzheimer’s Disease, to be driven by Shawe- Taylor across Salisbury Plain from the station to Long Crichel was to recall the headlong dash at the wheel of Mr Toad. One of the hardest tasks that befell Derek Hill, on his occasional visits, and in particular the distinguished ophthalmic surgeon Patrick Trevor-Roper, Shawe-Taylor’s last partner at Long Crichel, was gently to wean Desmond away from the wheel altogether, following a series of accidents that heralded the final sad demise of a mind that had always been accustomed to working in top gear.