The History of John Barry Steane 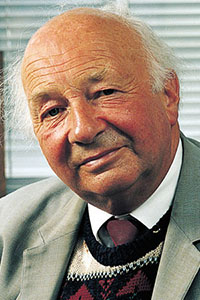 He attended Jesus College, University of Cambridge where he studied English under A.P. Rossiter from 1948 to 1952.
Upon graduating he became a teacher in Northwood, Middlesex where he worked until 1988; he wrote the introduction to the Penguin edition of Marlowe’s plays.

He joined the staff of Gramophone in 1973; there he worked mostly as a reviewer of recordings, both new and historical, of opera and other vocal music.

In 1974 he published his book The Grand Tradition: Seventy Years of Singing on Record which covered the history of recorded singing up to that point in time. Nine years later he began writing articles and reviews for The Musical Times.

He has also contributed many reviews and articles to Opera (1981–3) and Opera Now (1989–91), and he has authored numerous entries in the Grove Dictionary of Music and Musicians.

Music was a lifelong passion with Steane. During his years at Merchant Taylor’s he regularly played the organ for chapel services. An obituary in The Times, noting that choral music, and particularly the music of the Anglican liturgy, remained one of his greatest loves,[8] observes, “his beautifully observed and straightforwardly expressed views about the art of singing brought him to the attention of the EMI record producer Walter Legge, who suggested to the editors of Gramophone magazine that he would be a useful adornment to its panel of contributors.”

Steane began writing for Gramophone in 1972. In 1974 he took over from Desmond Shawe-Taylor the long-running quarterly feature, “The Gramophone and the Voice”, giving a second opinion on vocal issues reviewed in recent issues of the magazine. An editor of the magazine commented that Steane’s views were “beautifully judged, invariably generous and always elegantly crafted”. In 1999, the magazine published in book form a collection of these articles from the previous 25 years.

In 1974 Steane published his book The Grand Tradition: Seventy Years of Singing on Record, 1900–1970 which covered the history of recorded singing. It was enthusiastically received by the critics. The TLS wrote that singers had found in Steane “their Keats or Baudelaire, the poet of the sensations they create.” The reviewer praised his ability to characterise a singer with phrases of “poetic refinement”, though not eschewing humour, quoting his description of Nellie Melba changing in the course of one song “from Juliet at the ball to a knees-up-mother-Brown pearly-queen”.[10] In The Musical Times, Harold Rosenthal vigorously dissented from some of Steane’s opinions, but he too praised his gift for the “apt choice of a word or phrase to sum up a singer’s art or voice”. Music & Letters called it “a book for the connoisseur”. American Record Guide called Steane’s erudition “formidable” and the book “essential”.

In the 1980s Steane began writing articles and reviews in The Musical Times. Many of his contributions were about famous singers of the past, or reviews of books about them. These included Claudia Muzio, Beniamino Gigli, Lauritz Melchior, Enrico Caruso, and Margaret Burke Sheridan. His literary expertise was employed in a piece about the poets whose music Britten chose to set. Other articles drew on his long and wide experience of opera and song, from Puccini to Hugo Wolf. He also contributed many reviews and articles to Opera (from 1981), Opera Now (from 1989), and Classic Record Collector.

Steane contributed numerous entries in the Grove Dictionary of Music and Musicians and the New Grove Dictionary of Opera. The online combined edition of Grove at May 2011 listed 359 articles by him, mostly about singers, but with some about other subjects such as the conductor Tullio Serafin and the pianist Graham Johnson. He wrote the articles in the Oxford Dictionary of National Biography on Roy Henderson and Nellie Melba. Steane’s Voices, Singers and Critics was published in 1992, Elisabeth Schwarzkopf: A Career on Record (with Alan Sanders) in 1995, and his three-volume Singers of the Century appeared between 1996 and 2000.

Steane retired from Merchant Taylor’s in 1988. In 2008 he was honoured by the Worshipful Company of Musicians, on the occasion of his 80th birthday. He died at the age of 82. His final contribution to Gramophone, an appreciation of a vintage recording of The Barber of Seville with Maria Callas and Tito Gobbi, was published posthumously in May 2011.